Rome’s Fondazione Besso, located in  a 19th century Art Nouveau palazzo in the heart of busy downtown Rome, was the prestigious venue for  this week’s first  presentation of Etruria Storie e Segreti.

The Foundation’s  magnificent libraries and study rooms are  dedicated  to research on  Dante  and  Roman  history, making it the perfect  venue for the book presentation.  Francesca Ceci, Cristina Carosi and Luca Pesante  joined me at the conference table to  speak about  my newest  book, in Italian.

Later in the week it was  Francesca’s turn to give a talk at the Scuderie of Palazzo Chigi Albani in Soriano nel Cimino.
It was a chance to meet other history scholars and admire the former stables of one of Northern Lazio’s princely buildings which has been beautifully restored. 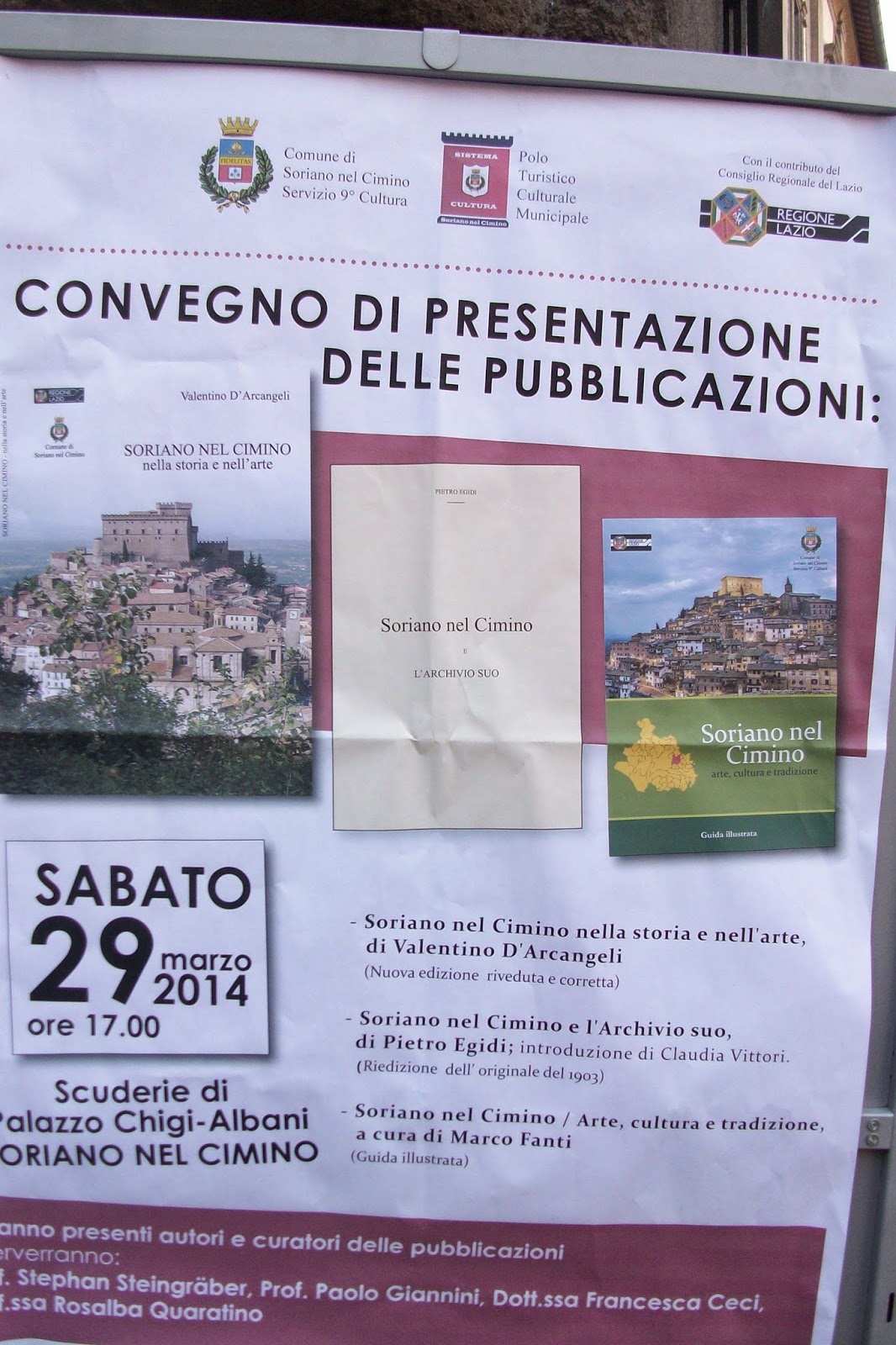 Yesterday ‘s venue  was a simple hall in the town of  Canale Monterano  in the province of Rome, amidst  rolling green hills of the nature reserve.  This time we were guests of  Cristina Carosi, curator of  Etruria Storie e Segreti Italian text and Daniele Natili,  who told the audience about the book. 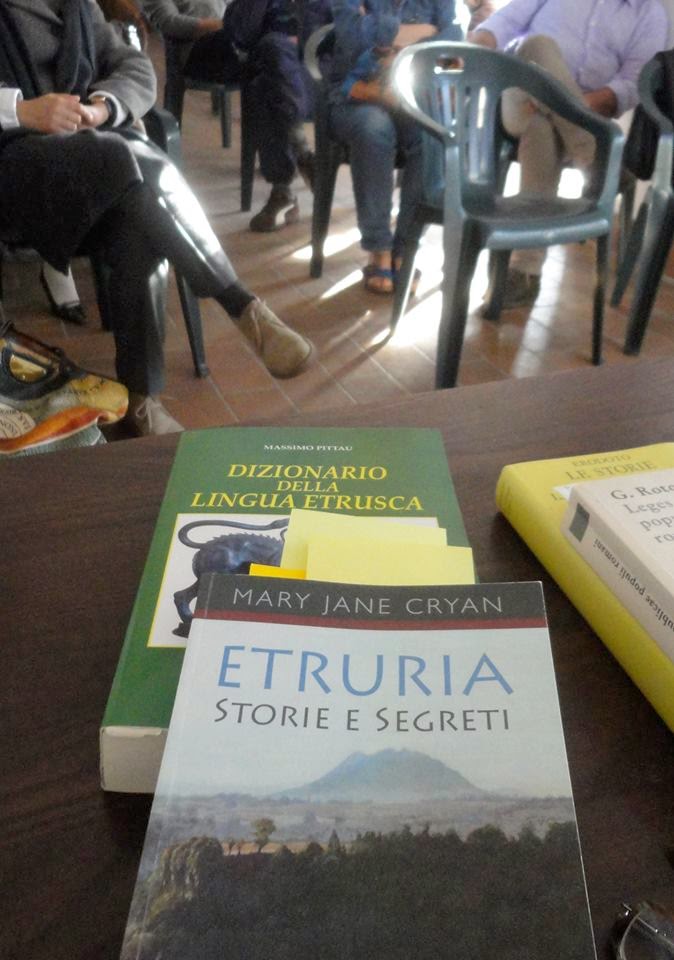 Next Saturday it is Fulvio Ferri’s turn to present his “evergreen” cookbook Olio e Ricordi in Cucina at the Libroteca bookshop in Civita Castellana. The presentation  will be  followed by  wine tasting  offered by Le Lase  vineyards of Orte.   Why not stop by  at 5:30 p.m.  to meet the author and have a glass of wine with us ?

The port of Civitavecchia hosted 959 cruise ships in 2013  with 2,538,258 passengers arriving or departing from the docks. These numbers  will soar even higher   in 2014-15 when  several new   Royal Caribbean  ships  will be using  Civitavecchia as their home port.

Dominic Paul, Vice President of  Royal Caribbean International  announced  that  the company is investing millions of dollars in the construction of new cruise ships and expansion to capture an even higher percent of Italian cruisers.

The company’s newest ships Oasis and Allure  (and later Quantum, which will become the world’s biggest cruise ship), will be  based out of Civitavecchia.

This  investment means  that the hinterland of Civitavecchia will enjoy  a beneficial ripple effect with more jobs at the enlarged cruise terminal, more tourists looking for  pre and post cruise stays and excursions. Repeat cruisers will be especially interested  in visiting new, scenic and historic sites in  Etruria –not just bus or train trips into Rome.

I was happy to present  Mr. Paul with a copy of my book “Etruria Travel, History and Itineraries in Central Italy“ as a thank you for having  had me as guest lecturer on many Royal Caribbean ships over the past eight years. Check  out the many cruise enrichment lectures and itineraries here.

Living in the layer cake of history  that is  Italy, it is easy to visit  Roman, medieval  and  Renaissance sites  all in the same day.


With the first real spring weather that is just
what we did this weekend.

While others biked or jogged in the  parks and  roads around  Viterbo, we took  half day trips to some of the area’s special  historical sites.

Saturday afternoon  was dedicated to Villa Lante in Bagnaia where guide Marco Zanardo  explained the Renaissance garden’s history and the philosophy of the cardinals Gambara and Montalto Peretti who created it in the 1500s.

Sunday morning  was dedicated to  Ferento, the Roman city destroyed by the Viterbese  in the 11th century and now  a pastoral  area studded with remnants of  centuries of habitation.


I was happy to see that the SYA (School Year Abroad) students  are participating in  a study project at Ferento  along with archeologists of the Università della Tuscia.

Both these outings were marked by  sunny weather, interesting encounters, well versed guides   and a series of beautiful  cats who  accompanied the humans  who came to visit  their  territory.

We were happy to meet professional photographer  Maurizio  Di Giovancarlo whose work  will entice you to visit the area.

Your comments are welcome as well as suggestions for other special places to visit  near Rome, Civitavecchia  and  Viterbo.

For those  in Rome  on Tuesday March  25th, I hope to see  you at  the  presentation  of my latest book
ETRURIA STORIE E SEGRETI
to be held  at the prestigious library of
Fondazione Besso, Largo di Torre Argentina,11
on the first floor.
Time  5 p.m.
Speakers :  Francesca Ceci, Cristina Carosi, Luca Pesante

Copies of the book are available in Rome at Libreria dei Viaggiatori, Via dei Pellegrino,78 near Campo dei Fiori  and at Anglo American Bookshop, Via della Vite near the Spanish Steps.
Posted by mary jane cryan at Sunday, March 16, 2014 No comments:

All in the Family: Florence's Oldest (and best) restaurants


Wondering where cookbook authors  go to eat when they are not cooking  at home ?

We have just returned from a two night stay in Florence, where we were able to fit in  a few meals at  my  favorite family restaurant   Cafaggi, run by successive generations of the same family for  over  92 years.

The magic ingredients  that make us return every time include the   traditional décor and menu, consistently excellent food  and  good value but most of all  the family itself.

What a pleasure to see the  the white haired nonno  still  taking care of the conti and  the lovely nonna  shuffling back and forth, checking that everything is in order .

Fulvio  has been  ordering  the same dish   at Cafaggi - cervello fritto  with carciofi fritti – for  the past   18 years and  a trip to Florence  isn’t complete without this  ritual.

I  try a different dish each time and have never been disappointed. 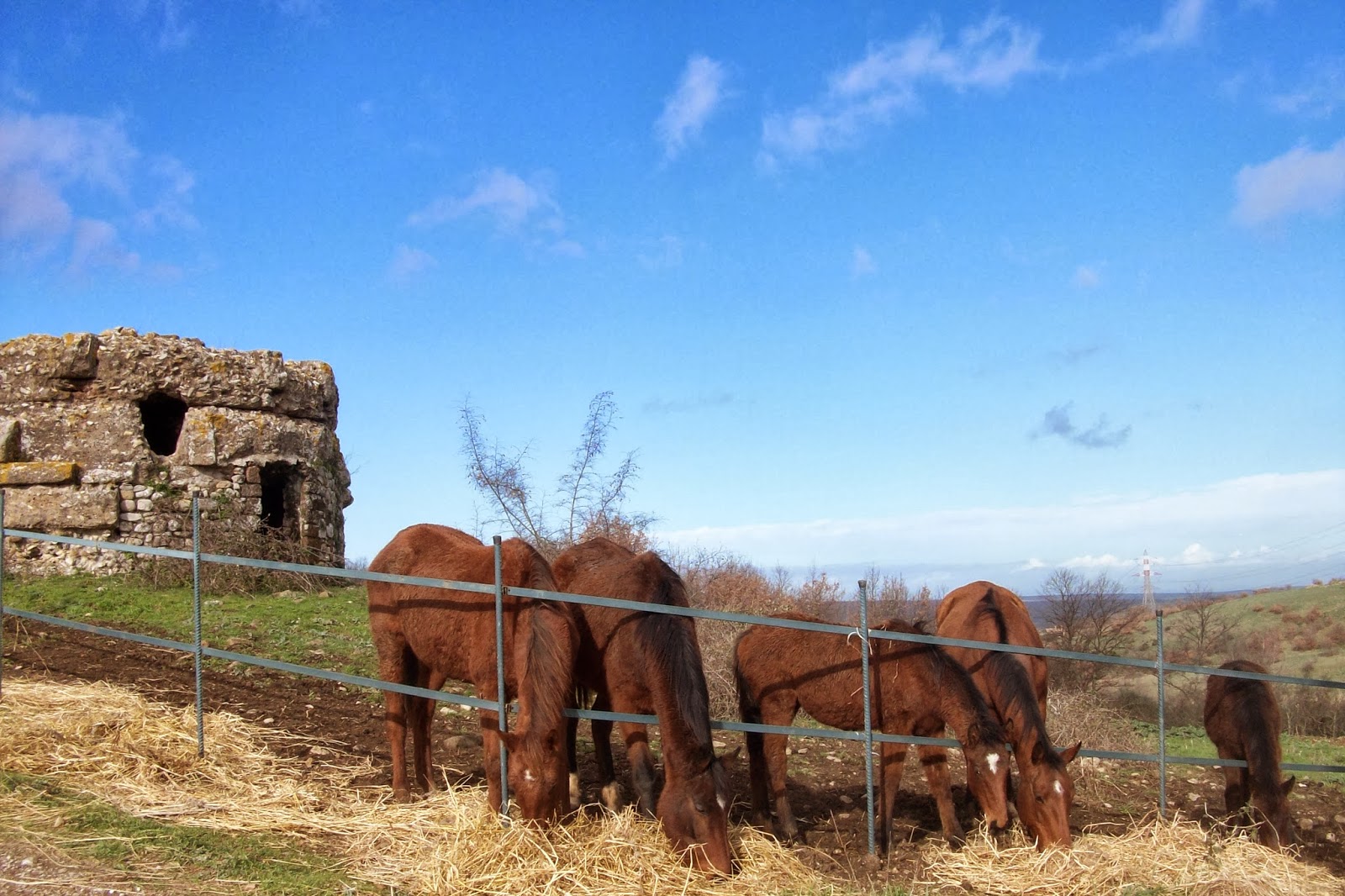 The  tiny  hilltop hamlet of Civitella Cesi lies at the  end of a long, winding road through the  Etruscan countryside near Blera.

It   is  a place  where time has literally stood still, an icon of  agrarian Lazio where  the ancient  country ways are  very much alive.

We  had come back to Civitella  after many years   for  the funeral of a special person, Angelo Bartoli, creator of the experimental archeological center Antiquitates .

The Center, created by Angelo many decades ago,  is  known worldwide for its  archeology courses, conferences, and summer programs for  students that combine sports with hands-on workshops.

The tiny piazza was overflowing with people come to pay their respects to  the area’s most important citizen. The men stood on one side, the women on the other, moving  with the sun and trying to  escape the chilly wind blowing up from the valley.

The derelict  Torlonia palace/castle at the far end of the piazza  was a sorry sight, with its   broken windows and overgrown  moat.

Once a year  this street is  the venue for  a popular  festa  dedicated  to fettuccine  al tartufo. It is hard to believe  that 10,000 people  made their way to Civitella  for this gastronomic festival   last August.

Angelo was remembered  by colleagues  and friends during  a conference  in Vetralla’s library yesterday where we viewed  a TV film   entitled “In the footsteps of the Etruscans”  where he was  described  as  the “Indiana Jones of Civitella Cesi”.