The summer heat wave is again upon us... and since we are no longer  youngsters we have had to say "no" to the many invitations and  happenings  this weekend.

When its this hot we get up early (6 a.m.) like the local farmers do then by  10:30 a.m. its time to  stay indoors, behind the wooden shutters (persiane) which along with the  ancient, thick walls keep  the heat out.

A plus  during these hot days is that there are finally  lots of parking spaces, for the town is almost deserted.  Most people head for a  one of the nearby  lakes (Lake Vico, Bolsena  or  Bracciano)  or   perhaps the grassy lawns at this ancient Roman swimming hole. 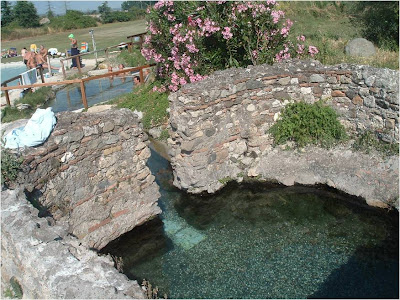 This  circular  pool is actually  a frigidarium   dating  from Roman times at  Le Pozze  di San Sisto half way between  Viterbo  and  Vetralla. Its  icy  waters are  balanced  by an  adjacent  hot  pool  caldarium  and another   luke warm  one.

For    tourists and visitors  here are some  more of  the  coolest places  around:

In  the hill town of  Soriano nel Cimino another   fountain comes  complete with a   waterfall. Perfect  for  a cool walk  is  the   Faggetta, the mountain top  forest located   above  Soriano.

Here are a few of the  romantic, cool spots I have enjoyed  discovering  in these past  years while lecturing aboard cruise ships. 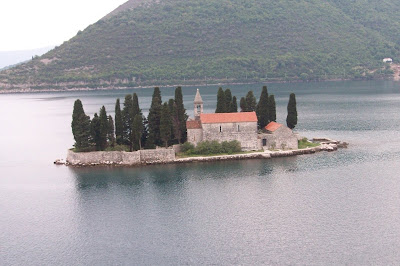 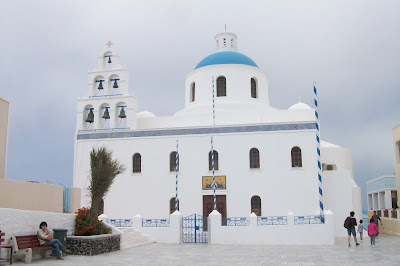 The  same  turquoise color  can be found here  in Vetralla in a   romantic  pool  inside  a grotto. 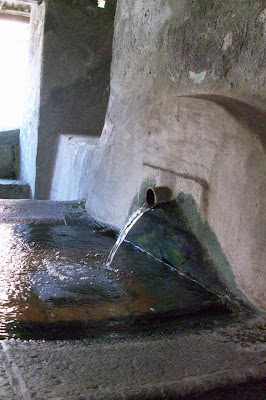 The hills  are alive with the sound of music…the hills of Northern Lazio, that is.

Throughout  the summer, from  seaside   Tarquinia to  Proceno on the border  with Tuscany, the sounds of music can be heard most  evenings thanks to a myriad of concerts  held in  many different venues.


You might find  a jazz  quartet playing in a   secret garden  or Baroque strings  in a castle courtyard.

For music lovers visiting central Italy, here is my personal  list of musical happenings in northern Lazio for the next month or so.  It is by no means  complete for most small towns in the Viterbo area  put on free concerts  and local  festivals (called Sagre if food is involved)  around mid-August.


Information  can  generally be found posted on  billboards around town, so keep your eyes open as you travel.

Other musical events are put on by  private associations  with  “members only”  mailing lists.

Most of the photos here were taken during the recent  jazz concert followed by dinner which closed  Opera Extravaganza's  season in Vetralla.

Check out these  websites for  the complete  list of concerts and to buy tickets on line to enjoy  a summer full of  music!

Viterbo Province-Tuscia Opera Festival
and Festival Barocco  are the  longest running, most prestigious music festivals in  the area.
Proceno-Convivio in Musica-Bach  concert July  24  at the castle of Proceno.

Do you know other local music festivals  in your area ?
Please leave a comment and help to make this a more complete listing.

From  our cruise ship docked  in the highly guarded military port of the  city formerly known as Leningrad, we  passed through the rigid  Russian  passport control  and  met  our private guide,Elena Lukianchikova and  young driver Costia.


Hiring  a local  guide and driver for  two days was  an expensive undertaking, but one  made gladly in order to explore  the city  I had missed out on visiting when  I lived in Moscow during   the  perestroika years .

I found  Elena   through Tours by Locals and we exchanged many emails  to organize the  visas, entrance tickets , car and driver.  She can be contacted  also  through her  private tour company  at louk@yandex.ru.

The first day we were beset by  torrential rainstorms,  but Costia  skillfully  criss-crossed  the city  boulevards  following  Elena’s  intricate directions, allowing  us to visit  several sites, including the  Yusupov Palace, without getting  completely soaked.
The second day  was the exact opposite:  warm with bright sunshine which made the gilded  domes  gleam  more brightly.  We visited a local market  and purchased  a round  bread before we began the  long drive out of the city to Peterhof . 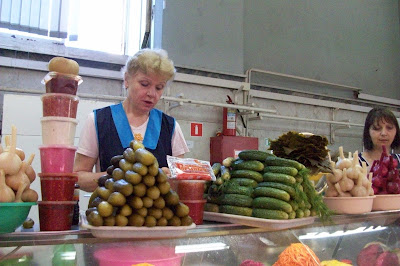 Since we had missed breakfast aboard the ship the  bread was very welcome as we drove along the wide boulevards flanked by gigantic new housing complexes.


Thanks  to Elena we were able to visit Peterhof’s  interior  and gardens   without  much waiting in  line. The  place was packed  for it was the height of the Russians’  summer holiday season and the  White Nights.


In the midst of the glorious fountains, gilded sculptures and  tourist crowds it was quite  a surprise  to see  a mother duck followed by  her ducklings  scuttling  across the  lawns  down to the  distant  canal .

We were in  Russia at Peter the Great’s    Peterhof  Palace  but the scene was straight  out of   the popular  childrens’ book “Make Way for Ducklings”   which has been immortalized  by a  sculpture in the Boston Public Gardens.

At the bottom of the huge cascade with its  gilded  statues and shooting fountains  we discovered  another Boston  icon-a swan boat!
Docked near the bridge was the restored original   boat  Peter the Great’s visitors used   to arrive in style from the landing dock to  the palace.

Coming up are more  reports on the  Baltic cities …and  summer happenings  in central Italy.
If you enjoyed this story, please share with friends on Facebook and Twitter. ..and leave a comment, in English, Italian or Russian.