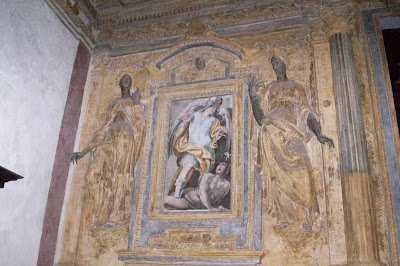 Here is a sneak preview of  my newest book Etruria Storie e Segreti, with photos from two of the contributors:  Francesco Pignatale and John Ferro Sims.   Thanks to Francesco's night time photos we get a rare peek inside  one of the palazzine of the Villa  which is furnished with  antiques and  has frescoed rooms and ceilings.


They were shot  during an evening visit  to  the gardens of  Villa Lante in Bagnaia, a suburb of Viterbo where the Renaissance cardinals Montalto, Gambara and Della Rovere  passed  their summer holidays.

Izumi  Otsuki Steingraber, who also contributed  to Etruria Storie e Segreti  tells  how the young  Japanese princes who  visited  here in 1575 were shocked by  this style of hunting.

The manicured gardens of Villa Lante are  a  perfect  place for  a Sunday walk, especially in summer, even more so during one of the rare evening openings. And if you choose to visit on  a cold January day you might find  the   boxwood borders   covered with frost, like frosting on a cake. 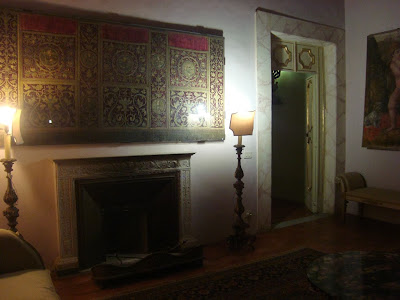 One of the artists who worked on the villa's  frescoes was   Agostino Tassi,  the lover and husband of Artemesia Gentileschi.  Their fiery  relationship  has been preserved by judicial reports dating from 1612  and make  interesting reading even now, 400 years later. 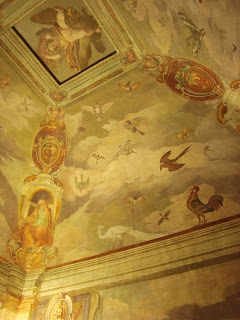 To find out more about Villa Lante and  Artemesia Gentileschi    check out Alexandra Lapierre’s biography Artemisa , the story of a battle for greatness.   Signed copies of Etruria Storie e Segreti can be ordered directly from my website  here.
Please share with friends  using the  buttons here below and don't forget to leave a comment.
Posted by mary jane cryan at Saturday, December 14, 2013 3 comments:

Art and Artisans in Viterbo and Vignanello

This weekend   everyone in the province of Viterbo  is celebrating  the  entrance of the Macchina di Santa Rosa   in to the   UNESCO heritage   list, which I wrote about  last week.

It is  a sunny weekend with   the olive harvest finished and people are looking ahead to the holidays: thus  there are Christmas fairs and  fairs celebrating  the local olive oil in just about  every town. 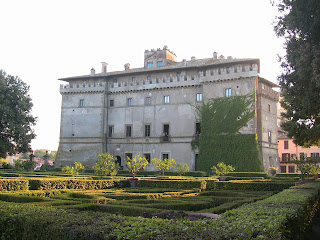 This morning  we drove over  to Vignanello  to check out the  art and artisans fair being hosted by Donna Giada Ruspoli in the family castle.

I have a video clip of our visit,  you can see it on youtube   Ruspoli Castle, Vignanello.  Also  on Facebook...but for some unknown reason, today  it won't load  on  the blog page.


Also  happening in Viterbo during this weekend:  the Chamber of Commerce  fair  in  the historic center . 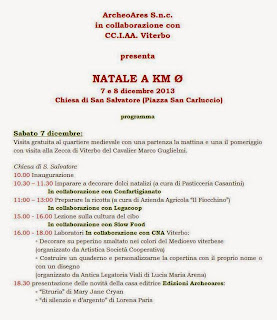 Posted by mary jane cryan at Saturday, December 07, 2013 No comments: