Everyone has a favorite beach along Italy’s 8,600 kms of coastline, but if you ask ten Italians where their country’s best beaches are, nine will give you the name of an island, usually Sardinia.
After  almost  50 years in Italy  I have visited  most of the islands and beaches but since   I am more of a  history  & museum person, I got a little help from my friends  to  put together this insider list of  Italy’s ten  best beaches.

This  article  has  been read   by  thousands of people, it is the absolutely most popular  post in my blog. I would love to  know  who  you are, so why not leave  a quick comment below.

Most of Italy's beaches  are covered  with stabilimenti, where one pays for entrance, beach chairs, changing rooms, etc.
Considering  the current crisis  the country is going through,  yesterday's issue of Corriere della Sera (June 30, 2012)  published  an article  about  FREE BEACHES.

Here is the list journalist Carlotta Lombardo  put together. You will need a detailed map and local knowledge  to find most of them.


1.     Italy has about 400 islands, some just uninhabited rocks, others organized as stunning  summer resorts. Crystal-clear water, unspoiled nature and unique folklore and culture can be found on the island of Sardinia.

From the little peninsula of Stintino  to S. Teresa di Gallura in the north-eastern corner, lies a Riviera of emerald water and fine sandy beaches, some of them with pink sand and some only large enough for a couple of beach blankets.
Old towns, many dating from the 12th  century are dominated by castles and walls which once held pirate raiders at bay. Summer villages and hotels are modern, elegant and offer facilities for water sports, swinging nightlife and fine eating. 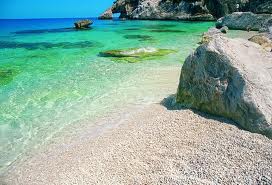 A relatively unknown part of Sardinia is the island of San Antioco in the south-western corner. Here gourmets can gorge themselves on local lobster and tuna and the wines of Calasetta.
Unless you are a  millionaire, avoid the expensive resorts on the Costa Smeralda and  stay clear of  beaches near large cities, like Cagliari's Poetto unless its low season.

2.     The 400 inhabitants of Stromboli island are not jittery even though they live on a still-active volcano in  the Aeolian archipelago north of Sicily. Famous for its black lava sand beaches, the comforts of civilization are assured although drinking water is brought in by cistern ship during the dry summers. Stromboli is memorable  for its natural  firework displays that awe   cruise  ship passengers  when they sail past in the night.

Closer to the Sicilian coast is the greener island of Vulcano, with lovely  beaches and mud baths. Both Stromboli and Vulcano can be reached by ferry from Milazzo in Sicily.

3.     The Tuscan island of  Elba, reachable  by ferry from the port of Piombino,  is  known for having once  housed the exiled French emperor Napoleon. Its green rolling hills, beaches like Biodola near Portoferraio, and laid-back lifestyle make it a perfect getaway. This is the only one of  the Tuscan  islands  I have yet to visit, but  this September  I'll be lecturing on a luxury cruise  that stops there.

4.     In northern Italy the Venetian lagoon holds several islands worth a visit. The Lido is a quick vaporetto ride from crowded St. Mark’s Square and is probably Italy’s most beautifully equipped beach with exclusive beach cabins, tents, white-jacketed waiters scurrying with ice buckets from the Excelsior’s bar and a famous gambling casino and annual cinema festival.

Chioggia, at the southern tip of the Venetian lagoon, is 40 miles from Venice by road or a two-hour cruise from Riva degli Schiavoni. An important fishing center, it boasts the lively Sottomarina beach, plenty of good hotels and nightlife.

5.     Ligurian beaches include those of Diano Marina  and the picturesque  hilltown of  Cervo Ligure a few miles up the coast from San Remo of music and casino fame.

6.The stretch of beaches near Rimini on  the Adriatic coast is a swinging summer spot with 15 kms of white sand, clean water and droves of Scandinavians, Russians and Anglo-Saxons from spring to autumn.  Each year the best beaches are awarded prizes signalled by a   “bandiere blu” flag.

7.Fregene and Ostia are Rome’s seaside resorts where a midday dip in the Med is possible before returning to the city. These beaches are fine during the week but are guaranteed to be very crowded on weekends. Ostia is connected to downtown Rome by a rapid train and has the added attraction of the archeological site similar to Pompeii, Ostia Antica.

8.Campers love the sandy coastal beaches backed by pine groves  between Albinia and Talamone near Grosseto because of several inexpensive campgrounds .   Gastronomic delights of the area include wild boar stew in the inland medieval hill towns , like Capalbio . Try La Parrina estate for  cheeses made on site, farm produce, local wine  and oil.
Beaches  on  the Argentario peninsula are  renowned vacation spots: choose from La Feniglia where the topless ratio gets higher every summer, near  Porto Ercole and Porto Santo Stefano and La Giannella , a family beach.

9.In southern Italy folks dote on the Calabrian coast and the islands of Pantelleria and Lampedusa which are  invaded by water and scuba-diving enthusiasts each summer. The swimming is great here even in October since the latitude is the same as northern Africa.

10. Since naturist  always  find the best, isolated  beaches,  I asked  Fulvio, who has been checking out Italy’s  beaches for  over  50 years, to give his vote.
His number one beach is Cala Coticchio  ( the locals call it Tahiti)  on the  island of Caprera in Sardegna. I only knew Caprera as the  refuge of Italy’s national hero Garibaldi, so its best to ask the experts.
Fulvio's second choice was  Cala Brigantina , a fiord like beach where a French  club even set up a resort.  Both of these are reachable only  by boat or after  a long, hot  walk .

Remember that most Italian beaches  are at their best in July, September and on weekdays, rather than weekends.
The peak season of mid-August and the  Ferragosto holiday will see you paying  up to 50% more for rental accommodations. In late spring and  other summer months  you can save and enjoy better  service.

Have you seen my newly redesigned website www.elegantetruria.com  yet? Pop over  for a look,  you will be surprised at how much  content, information  it holds.
Thanks to Laura  who updated it after  12 years !

This is one of the most popular posts on my blog ...if you found it  interesting, helpful, why not  leave a comment.
Thanks!
Posted by mary jane cryan at Wednesday, January 11, 2012