If you are watching  the TV series  “The Borgias”  you are taking a virtual tour of  some of the  hill towns in the area north of Rome.
Last night’s episodes  featured  a bull fight in the amphitheatre of Sutri and   a visit to the Odescalchi Castle in Bracciano. See more about this castle on the blog posts of the past couple of weeks.


The  film director  used some  good camera work  to make the view from the castle gardens  look like  the Bay of Naples.
Those of us who live here  have our personal favorites: usually they are the towns we know best…where our friends live, or where our  favorite restaurants are located.

Many of  the hill towns  in the Etruria area  coincidentally  begin with the letter “V”: Vignanello, Vallerano, Vitorchiano and  of course Vetralla.  I’d love to hear why from  a specialist in  linguistics.

Last weekend’s outing  brought me to  an “R”  town; Ronciglione, known familiarly  by  the natives  as “Ronciò”, which is also the name of a typical farming utensil used  to hoe and cut crops.

It has also been used  as  a murder weapon  in the dark days  when families such as the Borgia   lived and ruled in this area.

Entering  the town through an imposing doorway topped with papal coat of arms,  we walked along the main street where colorful Baroque period  facades  made a sharp contrast  with the  dark stone  of the medieval houses. 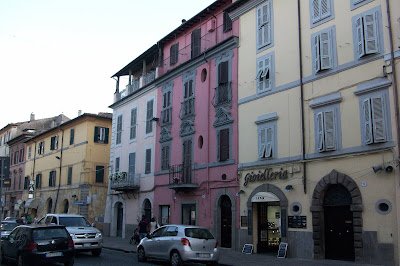 Each February a terrifying  rider-less horse race is held  along this street to celebrate  Carnival time .

The town is dotted with churches,  bell towers, palazzi, convents and castles and the medieval quarter  is intact and  perfect for a stroll , but watch out for falling roof tiles.

The streams  which rush through the gorges were used  as a primitive source of water power which made Ronciglione an early industrial center with production of metal objects and printing. Playing cards produced here were famous around the world. The tradition is continued by the Spada  printing company  which produced  my book Etruria.