Hill towns in central Italian are like icebergs: beneath  the  bell towers,  rooftops and cobble stone streets there   are often  several other layers, including  subterranean passageways and sacred places  dating from Etruscan and Roman times.

Some are easy to visit, like the dark, underground crypt of San Francesco church  in Vetralla  where  an ancient rite, known as the sepolchri, takes place  every Easter time.  You can read more about it  here.

The gardens surrounding the remains of DiVico castle  on the southern  side of Vetralla   have not been touched since the bombings by Allied  forces in January 1944. 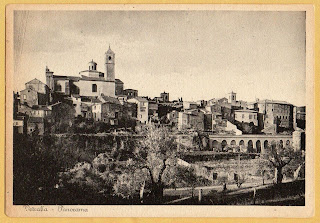 Older people of the town remember the  secret passageways that connected  the center of town to the countryside. During the bombings, families escaped through them to the safety of  grottos that can still be seen nearby.


Other towns in the Etruria/Tuscia area  have  recuperated  their ancient passageways and opened them to the public.

In Vignanello, volunteer speologists have opened  and cleaned a series of  ancient drainage passages, dating from Etruscan times,  located beneath  the  town's streets  and  the Duomo. During guided visits one can walk through these tunnels and see where the town nobility were buried .   Check out  the video of the connutti for a first hand look.

Perugia recently opened  an underground tour which includes a  walk on Roman roads and a visit  to a WWII bomb shelter.


Underground Orvieto is a fascinating  tour for those who have already admired the majestic Duomo and historic center. 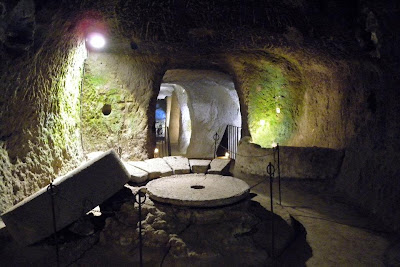 The  city of Orte-the ancient Hortae-is perched on a tufa outcrop overlooking the Tiber valley.  Intimately connected to the town by underground passages is a spectacular nympheum and  many  grottos excavated in the tufa rock.
Used throughout antique times and the Middle Ages as water cisterns, irrigation tunnels and passageways,  there was also a splendid moment during the Renaissance when a nearby monastery used these cisterns as a swimming pool and  spa for its  worldly resident nuns.

The arched rooms were used as bomb shelters during World War II  and,  during earlier centuries, as a place to breed pigeons.

You will find more information  about  these and other mysterious sites  in central Italy in
"Etruria-travel, history and itineraries in Central Italy" .

Cocciopesto  is the latest addition to the subterranean passageways   of  Orte and new itineraries are  discovered in Italy   each year.

Do you have a favorite underground place to share with other readers? 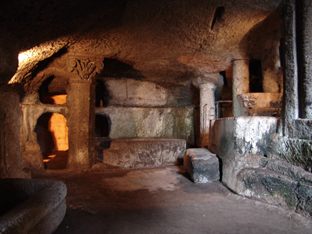 Many thanks to Luca Riccardi of Orte  for his photos.