The first thing one notices about Soriano nel Cimino is the Orsini Castle, built for  Pope Nicholas III  Orsini around 1287 as a summer getaway from the heat of Rome. 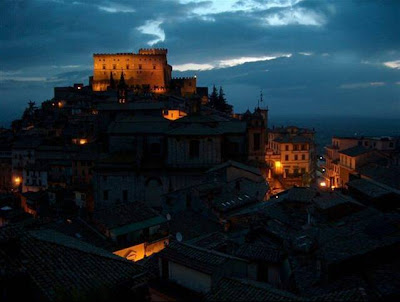 Over the centuries it has been the  private domain  of cardinals and papal authorities and,  until 1989,  a maximum security prison.  For this reason it has not been fully studied and reserves surprises for future art historians.

Many plaques  adorn the fortress  walls reminding of happenings in its long history:  Santa Rosa of Viterbo was exiled here 750 years ago, the  English Stuarts were  guests of Cardinal Albani in 1717 and the Allies bombed the town in 1944.

Another stunning complex, now in ruins, is Palazzo Chigi-Albani,  Cardinal Cristoforo Madruzzo’s  pleasure villa  between 1562 and 1578. 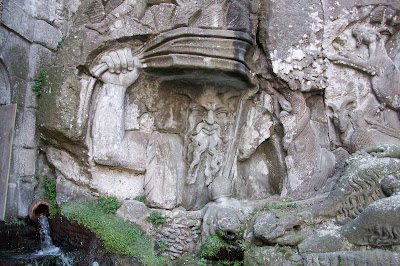 Here visitors lucky enough to find the gates  open can  admire the gigantic sculpted figures of the Papacqua  fountain: a reclining goat-hoofed woman with three babies clinging to her breast. Other figures include  a devil, Pan, gargolyles, animals, Moses and the four seasons. 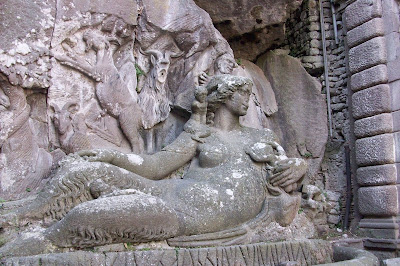 There are obvious similarities with the nearby Sacro Bosco (Monster Park)  of Bomarzo  for  Cardinal Madruzzo was an  intimate of Vicino Orsini and their continual correspondence shows they exchanged ideas and artists during the construction of their respective  country places.

Soriano  is a town for people with strong  legs, complicated  to park and best during the October  Chestnut Festival when its  four quartieri compete in colorful parades and flag-throwing contests. 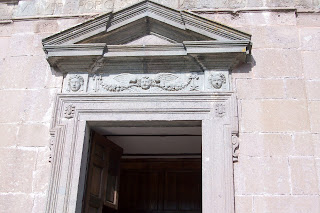 Another secret of Soriano can be found just down the hillside  bordering the town cemetery - the  delightful little  church of Madonna del Poggio.


Adjacent to its  pink peperino facade  is the entrance to the cloister  and the sadly abandoned  Franciscan convent . 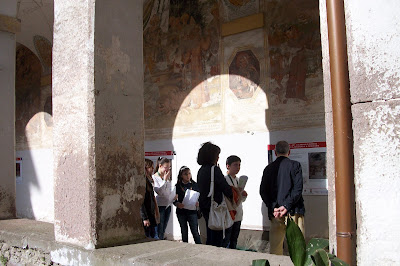 The cloister with its frescoed walls telling  the story of San Francesco. 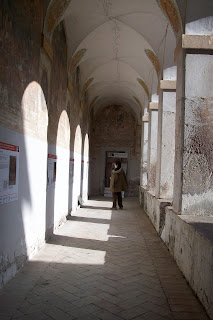 About  6 kms. from the center of Soriano, another surprise: the Passionist  sanctuary dedicated to early Christian  martyr  Sant’Eutizio   in the hamlet  of the same name. 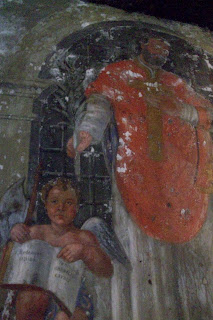 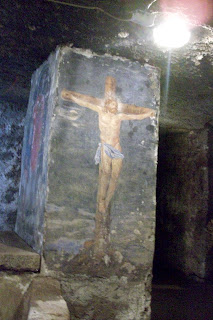 Beneath the church  is a small catacombs  used in early Christian days.  Frescoes adorn the walls and water filters  down to fill an empty tomb.

Most of the sarcophagi  were removed decades ago but a few bone-filled burials remain, adding a spooky  atmosphere to the underground site. 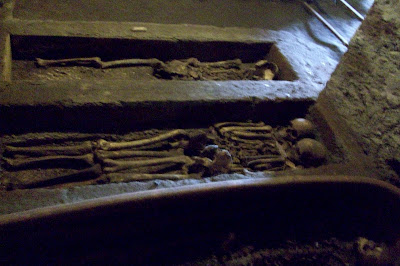 The easiest way to subscribe  is to enter your email at the very bottom of the page. Hoping  to hear from you!