February  2013  Update:  If you are planning to visit St. Peter's and the Vatican in the next  few weeks, be warned that the Sistine Chapel  will be closed  due to the Conclave to elect the new Pope.  I, as well as  a  group of priests, were  turned away  by courteous but stern Swiss Guards today as we tried to enter Sant'Anna gate to  make purchases at the Vatican Pharmacy.
Security  has been tightened... as it should be in view of the important Conclave  coming up. 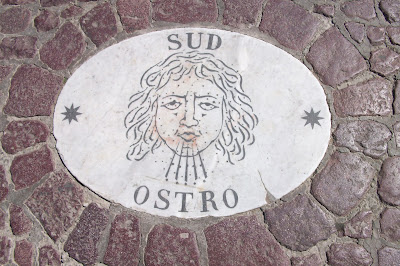 For over  35  years  I lived in Rome  under the shadow of Michelangelo’s dome  and called St. Peter’s Basilica my parish church.

Walking across the Piazza recently I noticed that the Borromini colonnade  is being cleaned . 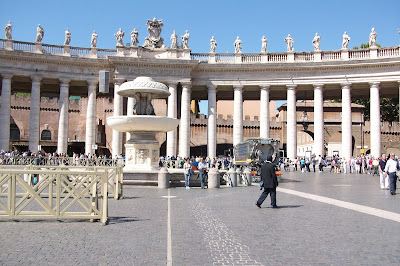 Decades of  dirt and smog are being removed  to reveal the  original white travertine marble.

Crossing the piazza you will note  circular  inserts in the cobblestones marking the winds and the center of the colonnade, where the columns “line up”  creating an optical illusion . 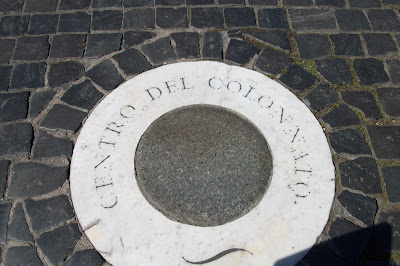 On  Wednesdays and holy days  crowds from all corners of the world fill St. Peter’s  Piazza, the Audience hall and the neighborhood souvenir shops.

Here are bricks from the Holy Door  of  St. Peter's Basilica.
The letters “RFSP”  refer to the Reverenda Fabbrica di San  Pietro.

If you are taking the underground  grotto tour,  you will enter  from the side door of the Reverenda Fabbrica’s office, to the left of  St. Peter’s façade.

The workers in the Basilica, Sampietrini, are responsible for  all the maintenance of the huge  Basilica and they proudly hold their  jobs  which are often  passed down from father to son.

One sampietrino  told me how thrilled he was - when he was working on yearly inspection and cleaning- to find the name of his grandfather scratched into the bronze atop  Borromini’s   baldacchino.

The map of Vatican City State  shows that this tiny country, enclosed inside the city of Rome, has most  modern conveniences including a pharmacy, police and fire  departments and  a polyglot  printing office. 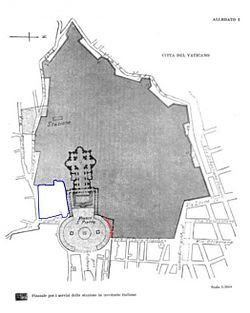 During my recent visit I could hear the band practicing for the  Swiss Guards’ annual swearing-in ceremony held in one of the internal courtyards.

The Library and Secret Archives are  opening up a bit thanks to  Lux in Arcana  exhibit now on at the Capitoline Museum.

According to the Vatican website, children are now welcome in the Papal gardens and  weekly conferences are being offered  highlighting  some of the Vatican  Musem's treasures.

Vatican's pharmacy with its  45 employees, is one of the world's busiest.  Roman citizens who need medicines  not yet available  in Italy  enter  through Sant’Anna gate  and  stop at the Ufficio Passi to ask for  an entrance permit.
Inside the Vatican Pharmacy they will be able to purchase medicines, with a doctor's prescription, paying  12-20% less for them.

On their way to the pharmacy, they pass by  the  Vatican supermarket where  prices are also exempt from Italian taxes.

There is also a Vatican  gas station, located  on the opposite side of St. Peter’s Square, where long lines form.  The  wait is  worth it, for  those with permission can buy gas at much cheaper rates.

The Vatican postal system  has two offices in the main square, plus the main office  across from the  discreet entrance to the Vatican Bank which has been under investigation in the past few years.


Most  tourists  who visit  the Vatican Museums  only  catch a glimpse of the territory through the museum's windows.


The poor and homeless  know this fountain, located  on  the corner of Via Gregorio VII around the corner from the charity  kitchen staffed by nuns. 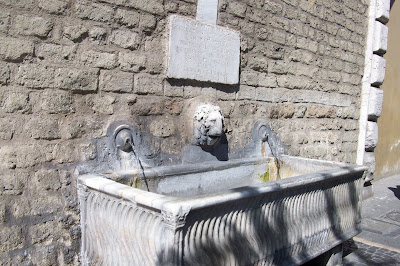 For a perfect day in the Vatican area, ignore the tourist traps near the Museum and Basilica and cross over

Ponte Sant’Angelo  to Via  Governo Vecchio on your way to Piazza Navona. Here tables are set up in the street offering  light lunches for locals and tourists alike.

A favorite  hostelry for visitors on a budget is the Beehive Hotel owned by Americans Linda Martinez and Steve Brenner.

Visit my website    to find out more about life in  Italy, itineraries in Rome and central Italy, cruises, study abroad, history, antiques.
Order copies of my books directly.