Villa San Giovanni in Tuscia,  a tiny hamlet of just over  1000 souls, is a mere  spot on the  map of central Italy, well hidden among the green  hills that stretch from  Vetralla to Blera.


Last weekend its  quiet streets came alive with artisans showing off their handicrafts  and  street artists frolicking as the village celebrated  the arrival of spring .

The history of the town mingles with its present.


Many of the  artisans have "escaped" from hectic city life in New York and Rome and found a new home close to nature in which to practice their crafts  and organize  laboratories for children and adults.

Mosaic pavements of a Roman villa were discovered here  a few decades ago when new water pipes were being laid.

More recent is  the discovery  nearby  of an intact sanctuary dedicated to the Etruscan goddess Demetra which pushed the clock back  even further to about 2,000 years ago. 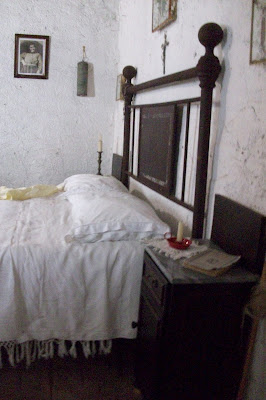 Time  goes so  slowly  in this area known as  Etruria that those over  50 were surprised  when the House Museum, Casa Museo was set up,  for the  interiors are just  as they remembered their grandparents’ homes.


And, like all village festivals, there were plenty of  good things to eat and drink during the day and at evening dinners.