A Visit to Etruria

A week ago, while staying in Vetralla, Tim and I decided to visit some of the less-trafficked sites in Lazio and Umbria, regions of Italy once inhabited by the mysterious Etruscans. Like most tourists, we had come to central Italy to visit the eternal city of Rome. As graduate students of classical literature and archaeology, Tim and I spend a lot of our time studying ancient Rome, and Tim wanted to see the big city for the first time. While the Coliseum, the Forum Romanum, and the Pantheon are breathtaking, our two days visiting sites in outer Lazio and Umbria opened our eyes to the colorful burial rites of the Etruscans, an enchanting 16th century garden, a dying city on a cliff, and the beautiful medieval town of Orvieto.

The first stop on our itinerary was Tarquinia, an ancient Etruscan site with a series of painted tombs dating from the mid-6th century to the 2nd century BC. Tim’s interest had been sparked by the Etruscans, who had inhabited parts of modern Lazio and Umbria since at least the 10th century BC, and he was scheduled to give a lecture on these tombs to Duke study abroad students later in our trip.

We descended into the damp interior of these wealthy
ancient Etruscans’ tombs, proceeding down long corridors to dead ends at which we pushed buttons to illuminate the inner chambers of the tombs, which are lined with vibrantly painted frescoes.

The frescoes, which would have surrounded sarcophagi holding the tombs’ inhabitants, depict scenes of banqueting and dancing, scenes with demons and mysterious fake doors, scenes of hunting and fishing, and scenes of athletic games.

In the impressive museum located in the modern city of Tarquinia, we saw the sarcophagi and grave goods that had been found in these tombs. On the lids of the sarcophagi, the Etruscans sculpted their dead family members in a reclining position, as if dining; scholars suspect that the arrangement of the tombs, the lids of the sarcophagi, and the paintings on the walls point to a conception of the afterlife as a continuous, eternal banquet, surrounded by friends and loved ones.

For our next stop, we jumped forward in time to a similarly ethereal site near the modern town of Bomarzo.
Vicino Orsini, a noble prince of Bomarzo, had a “sacred forest” built for his wife, Giulia Francese, in the 16th century.


The park is strewn with fantastic sculpted creatures and monsters, which startle and fascinate passers-by; as one inscription indicates, the layout and decorations of the park are intended to liberate the spirit and startle the mind with “lions, tigers, and bears, oh my!”
Terrifying giants lurk, beauties sleep in corners, elephants rage, monstrous faces spook, and houses lean, destroying any sense of equilibrium.

The next day we set out on a road trip to the fossilized city of Civita di Bagnoregio. Civita was built on a plateau of volcanic tuff that has eroded drastically since the town was built so that now it can be reached only by a bridge that snakes its way from the modern town of Bagnoregio into the heart of the dying city. 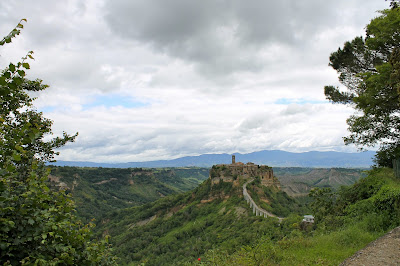 We happened to go on a Sunday and a holiday, so the town, which contains a mere handful of actual inhabitants, was full of pilgrims from nearby towns and countries, who flock there to enjoy the surreal landscape. Most walked across the bridge into the town, but some rode motorbikes, and we even encountered a company of horses, who arrived just as the town’s bell tower chimed noon.

The town contains several restaurants and gift shops, but the real treat is to wander around the narrow streets and crumbling houses and imagine that you are the last inhabitant of a dying town in a magical, forgotten land.

After our hike to Civita, we drove along winding roads into the olive and wine country of Umbria to visit another city once founded by Etruscans, Orvieto.


The city is now a beautiful relic of its thriving Medieval and Renaissance past, with one of the most fantastic duomos we have ever seen. The facade of the cathedral dazzles with  14thcentury sculpture by Lorenzo Maitani and walls constructed of alternating layers of white travertine and greenish-black marble.
Inside, we noticed a portrait of Vergil that often appears on Latin textbooks, painted inside the San Brizio chapel by Renaissance greats Fra Angelico and Luca Signorelli. 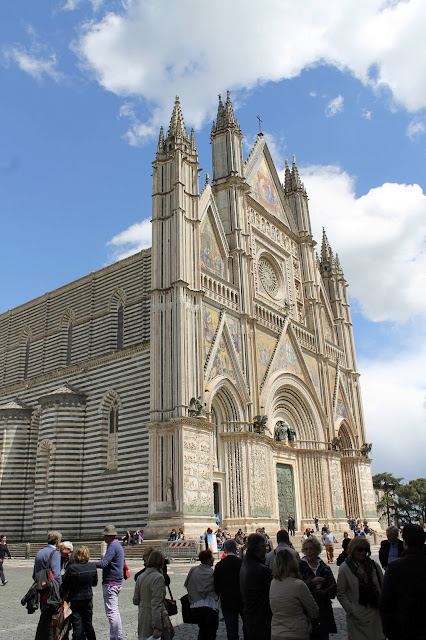 Coupled with the painters’ Last Judgment, the portraits of classical authors decorating the side walls of the chapel provided a reminder of the region’s complex interweaving of pagan and Christian identities.

We spent the remainder of our day wandering around Orvieto: we met a delightful young shoemaker and leatherworker named Federico , ate a delicious lunch in a restaurant near his shop, and visited two fantastic archaeological museums, il Museo Claudio Faina and il Museo Archaeologico Nazionale, which are brimming with Etruscan finds.

Our two days in the land of the Etruscans reminded us what a wealth of history, art and archaeology can be found in even the smallest towns in Italy, many of which contain mysteries preserved from the region’s rich past.
If you have one more day in the region, we recommend visiting Cerveteri, another ancient Etruscan necropolis, and Viterbo, a medieval town with an interesting papal history. 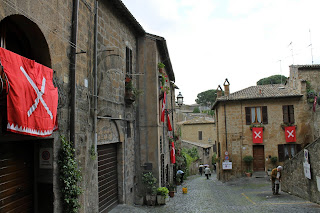 Ciao, and thanks to Mary Jane for asking us to write this guest post and for providing a warm welcome in Vetralla. Thanks also to Fulvio, our special guide. What would you want to see if you had two days in Etruria?

To learn more about the area and find related blog posts about Bomarzo  and Civita di Bagnoregio, use the search bar  at the top of the page.