Majestic stone  towers, churches, castles  and  a newly rediscovered abbey are among the top sites  to visit in Tuscania, a  small  city nestled among the rolling hills  and a verdant valley that D.H. Lawrence called the most beautiful in Italy.

Unfortunately we do not know what the  Etruscans called this settlement, but when the Romans  arrived they gave it the name  Tuscana. For a few centuries known as Toscanella,  and now    Tuscania,  it  may be only a pin point on the map between the  seaside town of Tarquinia and the provincial capital,Viterbo, but it has its share of magnificent architecture and  monuments.

The first  site  not to be missed  is the huge, abandoned castle of Rocca Respampini, which can be seen in the distance, along the scenic Via Vetrallese, half way between Vetralla and Tuscania. 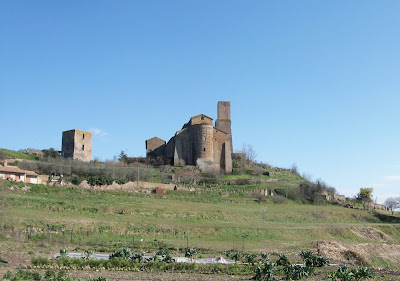 Rivellino, the original settlement of Tuscania, is  a  windy hilltop  crowned  with towers and the monumental  church of San Pietro with its intact Cosmatesque pavements.  Unfortunately photos are not allowed inside these monuments, so you'll have to take my word for it: they are magnificent.

A series of dusty  black and white  photos on view inside the church  remind us of the destruction wrought to this building, and the entire town, during  the February, 1971 earthquake.

The complex of S. Maria Maggiore,  at the base of the hill,   merits a close look for its  magnificent façade as well as the  interior  where Etruscan sarcophagi  are lined up  along the nave.  Just a few steps away you will find the remains of a Roman thermal bath on the side of  the road.

The town fathers of Tuscania   have intelligently left a stretch of the original Roman  road, the Via Clodia,  visible  in the center of the town, on the way to the former church of San Francesco where  a school for  chefs, the Boscolo Etoile Academy, is  now installed.

The  recently restored Abbey of San Giusto, located a  few kilometers  out of town in the Marta river valley was a completely invisible ruin for over 500  years until purchased and restored by a private owner from Bologna. Now returned to its original splendor it is another of the many special places to visit in Tuscania.

These are only a sample of the  itineraries and special places to visit in central Italy. Take a look at my website for  indepth articles and for more on the mysterious sites of Northern Lazio  see my latest book.