For centuries  scholars have tried to understand  the meaning behind the esoteric sculptures of the  16th century park  created by Vicino Orsini  in the valley below his palazzo in the tiny town of Bomarzo.  Perhaps  the  secret code of the Sacro Bosco  has finally been broken. 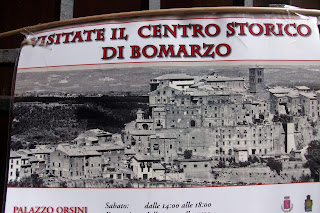 Orsini's Sacro Bosco, also known as the Park of Monsters,   has a new interpretation thanks to  Antonio Rocca whose study  Bomarzo Ermetica  was presented on Saturday in the magnificent  salone of Palazzo Orsini castle of Bomarzo.

Among those present, local politicians, foreign professors and a large number of young people interested in the history and art of the area.

During the conference  landscape architect and historian  Sofia Varoli Piazza  explained  the connection  between landscape and historic gardens in the Tuscia area, others expounded on the  economic value of beauty and  how to promote  and protect sites such as the Sacro Bosco. 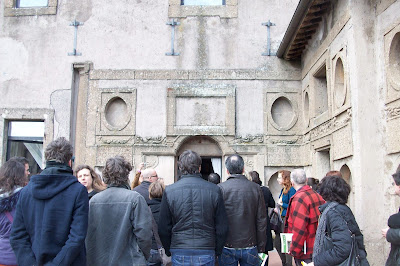 Off limits areas of  the palazzo-now the City Hall- were opened  allowing us to view the private  terrace with mottos by Orsini.
Here  are a few of the inscriptions telling Orsini's  philosophy. 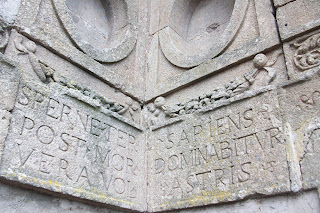 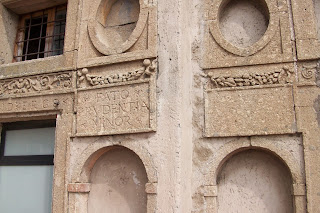 Symbols of the Orsini and Farnese families-the bear, the rose and the lily-can be seen throughout the palazzo and the town.
The park  was created  by Vicino Orsini  to honor his wife Giulia Farnese, to express his philosophy and  to amaze and out-do  his  contemporaries who created their Renaissance gardens  in other towns of the Tuscia-Viterbo area also  known as Etruria.
At the palazzo complexes  of  his contemporaries (Marescotti Ruspoli in Vignanello,  Lante della Rovere in Bagnaia and Farnese in Caprarola) the gardens are all adjacent to the buildings,  but at   Bomarzo  the park  is quite a distance away since the palazzo is built atop the steep hill.

The two sites complement one another: without the palazzo, the park, now owned by the Bettini family,  is incomplete and vice versa.

Over the centuries  the  roads that linked the Sacro Bosco to the palazzo on the hill  have been destroyed but hopefully they can be newly joined. If the administration can solve the parking problem with a shuttle bus many of the thousands of  tourists who come the park each year could also enjoy  the rarely seen historic center and the palazzo.

As usually happens in Italy, the conference ended with a buffet. It was  served  in the entrance hall of the palazzo,  overflowing into the piazza . 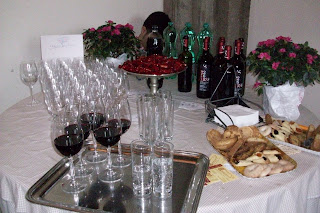 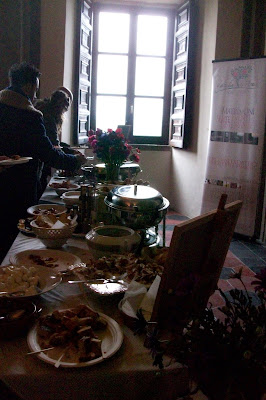 After  the buffet  and some exploring in the old medieval center, Antonio Rocca  accompanied  those present  to the Sacro Bosco for an  in depth, on site explanation.    Have you been to the town of Bomarzo?  to the Sacro Bosco?
Your comments, questions, reactions  are welcome.  You can leave comments (lasciare commenti, anche in italiano  qui sotto) Then  click anonymous in the window that opens...or with your name and/or website.