Among those who rediscovered the Etruscan sites in central Italy and publicized them with their books were  Scots  and  English including Lady Elizabeth Hamilton Gray  and George Dennis, accompanied by  artist S.J. Ainsley  whose drawings  show the tombs as they once were. 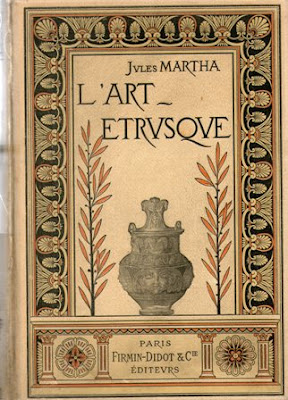 Jules Martha’s  L’Arte Etrusque  published in Paris in 1889  has color plates depicting  the magnificent art, coins, jewellery, mirrors and bronzes of the Etruscan civilization that were coming to light.

D.H. Lawrence lived for some time in Tarquinia and  his  Etruscan Places   published in 1929,  captures  some of the mystery of this  little  known civilization.


In order to recapture the emotions of those pioneer days, I suggest a visit to  Norchia or  Grotta Porcina near Vetralla or Castel d’Asso outside Viterbo.

Early spring is the best time for  these Indiana Jones type of explorations, for the grass will not be high  and snakes will still be hibernating.

Take a walk in the countryside to visit  the  newly discovered site of Demetra’s  sanctuary known as  Bagno Sacro, sacred bath.

Here a metre high terracotta statue of the goddess was recently found at the end of a track similar to other vie cave paths carved in the tufa stone  throughout the area.

In her delicate, dreamy pastels, local artist Monica Ferrando  perfectly interprets the Etruscan  love for nature and the story of Demetra.   More of Monica's work can be seen here and on her new website. 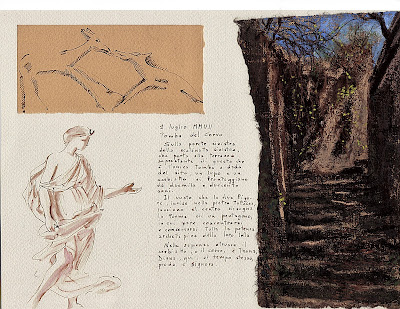 When not traveling between Venice and Rome or sketching at the Louvre, she pours out her love for the area  working in  her south-facing Vetralla studio set in a luxuriant garden.

On March  8th   there is free entrance to the Necropolis and Museo Etrusco  in Tarquinia for  women, just another reminder that theirs was a matriarchial society and Etruscan women were more liberated than their Roman neighbors.