The Heart of Rome Itinerary - with artist Justin Bradshaw


Piazza Venezia and the  Capitoline Hill, make up the  pulsing  heart of Rome and thus  are the perfect  starting point  for a visit of the  Eternal City. 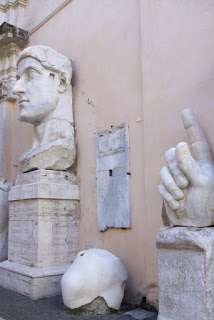 La Piazza del Campidoglio/Capitoline  piazza, one of the most perfect urban spaces in the history of architecture, was designed by Michelangelo. Here visitors are greeted by a selection of marvelous statuary bits and equestrian statues.

These include  twin statues of  Castor and Pollux  and in the center of the piazza, that of  emperor-philosopher  Marcus Aurelius.

The present statue is a reproduction of the original  which is kept in the Palazzo Nuovo. It is the only Roman  bronze statue that survived the medieval period-because it was thought to portray a  Christian emperor.

The area had a completely different  look  before the Victor Emanuel  monument was built  between the years 1885 and 1911. 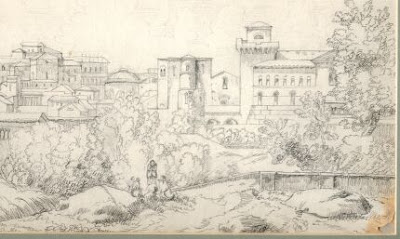 In this sketch  by Ludovico Caracciolo  (circa1830)  the towers of the Farnese gardens which once stood on the spot are visible.

Nathaniel Hawthorne  described  his visit to the  Capitoline museums  in a March 1859 diary entry and later used them as the setting for his novel “The Marble Faun”.

“I went to the sculpture-gallery of the Capitol yesterday, and saw, among other things, the Venus in her secret cabinet. This was my second view of her: the first time, I greatly admired her; now, she made no very favorable impression.


We looked at the Faun, the Dying Gladiator, and other famous sculptures; but nothing had a glory round it, perhaps because the sirocco was blowing. These halls of the Capitol have always had a dreary and depressing effect upon me, very different from those of the Vatican. I know not why, except that the rooms of the Capitol have a dingy, shabby, and neglected look, and that the statues are dusty, and all the arrangements less magnificent than at the Vatican. “


Many  writers and painters  described the Capitoline especially during the Grand Tour period.

London-born painter  Justin Bradshaw  is a perfect guide to the modern  pulsing heart of the city: the  Capitoline, Piazza Venezia and  adjacent neighborhoods which he knows well.

“I can't help admiring the Vittoriano's unashamed self-celebration, like a wedding cake it announces that it is the centre of the festivities”,
confesses artist  Justin Bradshaw,
who has dedicated many hours painting the imposing structure as well as the quiet corners and courtyards  such as the  Turtle Fountain in Piazza Mattei,  shop windows and reflections which can be admired on his website.


Every year  the artist’s newest works are shown at   a personal show at Sestrieri gallery in  Piazza Margana, just  a stone’s throw from the monumental Piazza Venezia.


Bradshaw, who   lives and works between Rome and  his studio in  Civita Castellana, has also illustrated books about historic travel.

The Capitoline/Campidoglio is also a romantic place as  the announcements for weddings taking place in Rome are posted  there and the springtime sees  a flurry of  civil weddings  held  in the lovely Sala Rossa.


The Vittoriano or  Altar of the Fatherland, holds the tomb of  Italy’s  unknown soldier as well as several exhibition halls, Museums dedicated to  Emigration and the Risorgimento.

Scholars visiting the Risorgimento  library will also travel back in time: the original  1908 wrought iron  elevator is still the only way to arrive  to the Archives located on an upper floor.

Most tourists  will be content with the  panoramic glass elevator installed in 2007  on the external part of the monument.
A lucky few  will get a chance to ride in the wood panelled hexagonal VIP  elevator in the Capitoline Museums.

When the construction of  the monument was being completed, architects and  workers enjoyed a banquet inside the belly of the 12 metre high bronze horse statue that is its centrepiece.

Napoleon’s mother, Madame Mère,  lived out her life in the palazzo facing the Vittoriano, and kept her eye on happenings, including the annual Carnival festivities,  from this shuttered balcony on the corner of  Via del Corso. 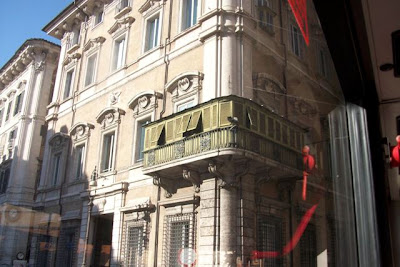 When hunger strikes, there is a bar  restaurant  with panoramic terraces,
pricey snacks  and a covered dining area on the upper level of the Capitoline Museums.

City employees and  vigili  urbani  take their coffee breaks at this busy snack bar near the Treasury  offices .