Mysteries of Messina- sea monsters, a musical clock and a phantom museum

According  to  Greek mythology  the  Straits of  Messina  were home to   sea monsters Scylla and Charybdis. Celebrated  by  Virgil and Homer,   these dangerous monsters  represented  the difficulties   sailors  met  when   passing through   the  narrow passage   separating   Sicily from the  Italian  mainland. 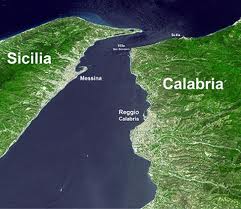 The names  Scylla and Charybdis  ( in Italian  Scilla  e  Cariddi )  have   remained, even   in the  English language, to  signify  danger and  the plight of  having  to decide between two  evils.

Lovely beaches,  villages and medieval castles dot  both  the Calabrian and Sicilian  sides  of the Straits , but  the coast line is also marred  by  two huge steel  plyons used  between  1955 and  1994 to  carry electric lines across the straits.
Let’s hope that  no other  monsters- giant wind towers or  Berlusconi’s planned  bridge- are constructed   here.

When cruise ships  arrive  to the port of  Messina, they are greeted  by   the Madonna  della Lettera   and find that  they are  in the heart of  the city , making it easy  to explore  Messina  on their own.


Most of the city  was  rebuilt  after  the 1908 earthquake  which killed over 150,000 people. The bombings  of  World War II  are another reason for   the city’s present low buildings and  wide  streets.

Messina has seen  a succession of civilizations:  Greek  , Roman,   Saracen  and  Norman , but sadly very little of  these  ancient layers of  history  is  evident at first glance.  What  is evident is the amazing   astronomical clock on the bell tower next to the Duomo. 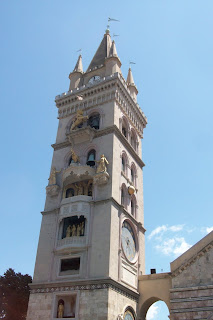 Created  by the  Ungerer brothers of Strasbourg  and installed  in the rebuilt tower in  1933, it  is more than  a reference point to  locate  the city center.
The  gilded mechanical figures  representing people and happenings  of local history make it the city’s  major tourist attraction.


One wonders  today  about the  political mechanisms  and friendships that were activated (local bishop, governments of  Mussolini and Hitler) to organize and pay for  this mechanical wonder.


At   noon each day   the main  piazza with its magnificent 16th century  fountain,  Duomo  and tower  is crowded  with  tour buses and visitors milling around waiting for  the  show.


A  young  couple, hoping  for tips,  entertains the crowds with  their interpretation of the  tarantella until the clock strikes noon and the bells peal. Then   numerous  mechanical beasts and statues  put on a sound and  motion  show that lasts for  a quarter of an hour.


A 4 metre  high gilded lion holds a banner, roars and moves its head and tail ,  a giant cockerel crows and flaps its wings  and numerous figures representing other  important  moments in the city’s history move  across the  façade of the bell tower .

Following  the  show the crowd disperses to  indulge  in  ricotta filled  cannoli  at the nearby  pasticceria, or  to   ride the  mini train that criss crosses  the  city center.


Another  of Messina’s mysteries  is the phantom   museum located  at  the  northern  end of the  modern single  track train  that runs  the length of the city  along the seaside.


The Regional Museum of Sicily, a  huge modern complex  meant to house the region’s art masterpieces must have cost  a fortune.
Upon arrival  at the end of the metro line  - the crude  reality.  The majestic brick  and glass building  has never  been opened, rather it is abandoned  to the elements and  overgrown with weeds.