Over 700 million Irish -and those of Irish descent- scattered  in all corners of the globe  will be enjoying a   long weekend on March 17th  full of  festivities and  parades  in honor of St. Patrick’s Day .  For the first time Italy will be celebrating the day too,  for  March 17th  has been proclaimed  a National Holiday  in honor of the country’s   150th anniversary of   unification .
Italy and Ireland have shared  connections for a long time.
Irish pilgrims, saints and scholars gravitated  toward Rome while   legend tells us that even the patron saint of Ireland -Patrick-was originally from Italy.   In  the ancient basilica of St. Stefano Rotondo set in  the quiet of  Rome’s Caelian hill  there are curved

walls  frescoed with  gory scenes of  martyrdom and   also  a plaque


who died during a pilgrimage to Rome and was buried here in 1064.


Monumental graves in front of the altar of  St. Pietro in Montorio

The first printed map of Ireland appeared in “Le Isole piu famose del mondo” in 1590 where Venetian cartographer Tommaso Porcacchi showed Hibernia laying on its side. In the 18th and 19th centuries many Italians migrated to Ireland including Charles
Bianconi who organized an entire transport system for Ireland
including coaches which crisscrossed the country and a system
of postal stations, inns and mail delivery. Even today Bianconi
Inns can be found in smaller Irish towns . 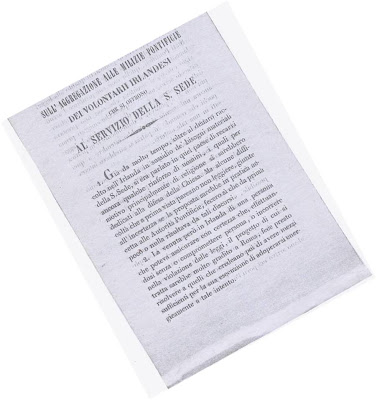 Among the Irish  saints and scholars  who were  regularly  “exported”   to Italy many  left  indelible marks  on the Eternal City . One was Franciscan Luke Wadding who set up St. Isidore’s Church and the Irish College. Dominican priest Joseph Mullooly  excavated  under  San Clemente‘s   Cosmastesque pavements  to find  an earlier 4th century church and, on a still lower level, a pagan Mithraic temple and Roman houses.  Besides being an amateur archaeologist, Mullooly was also an important figure in a little-known chapter of the Risorgimento  which  gives  Irish and Italians  a common reason for
celebrating this March 17.
In 1860 along with  Paul Cullen,  head of the Irish College in


Rome,  Mullooly  was the  mediator between Austro-Irish officers


and the papal government for the formation of the St. Patrick’s


Irish Brigade.   Prior to 1860 Pius IX and his counsellors had


doubts concerning the enlistment of Irish soldiers to defend

But by January 1860 Pius IX had changed his mind due to  the seriousness of the situation in central Italy and sent  Count Charles MacDonnell,an Austrian officer of Irish descent, to Dublin to  organize  the volunteer movement.


During the summer of 1860 over 1,000 Irish volunteers travelled from Ireland to Italy where they  participated in the battles of Spoleto, Castelfidardo, Ancona and Perugia.

Fighting  valiantly  against enormous odds they wrote  a short but glorious chapter in the history of the  Italian Risorgimento to be remembered during this year’s  Unification  celebrations .
You can order  a copy  of my book on this subject directly  ...there are less than 100 copies  left.
.