During a recent visit to the newly reopened  Civic Museum in Viterbo a series of  graffiti  caught my attention:  they include  designs and phrases scratched into the plaster  by a prisoner, one Nicolo, son of Francesco Bartoli, from the  town of Barchi, near  Fano in  the Marche.

When the outside wall enclosing the  cloister’s upper level  was removed and the roof level raised sometime in the past  200 years, these graffiti were re-discovered but the area was closed off to the public until the most recent update a few months ago.

See the photos of my recent presentation at the Museum.

The convent and adjoining church S. Maria della Verità have undergone many changes over the centuries: they were damaged  during the bombings of  World War II, and only a  short time ago, the Museum was closed down for  several years when a section of the ancient walls collapsed on to the street.

Finding  graffiti in old Italian prisons is common,  for  the incarcerated had nothing  to do to  pass the  time and used the walls of their cells as a  canvas or diary.  Visitors to  the Doge’s Palace in Venice and  Castel Sant’Angelo in Rome can visit  graffiti filled cells and even my small city of  Vetralla counts  scores of graffiti  in abandoned churches, historic sites and the building used as a prison, many of which have been  studied by local paleographer, Carlo Tedeschi. 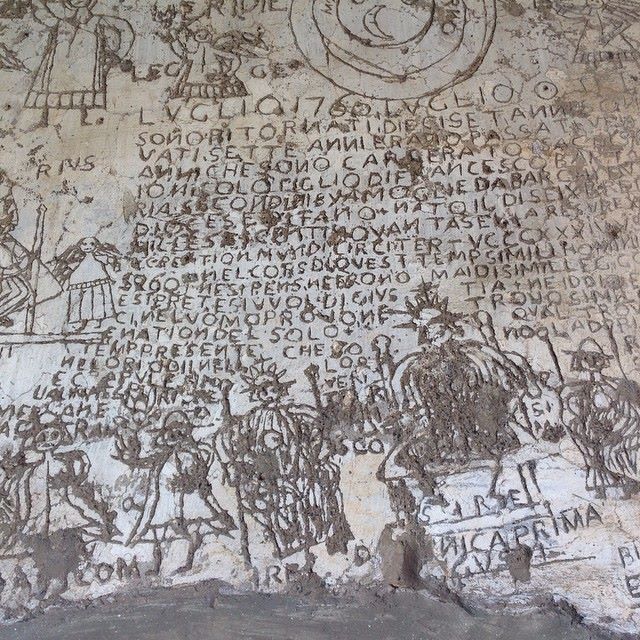 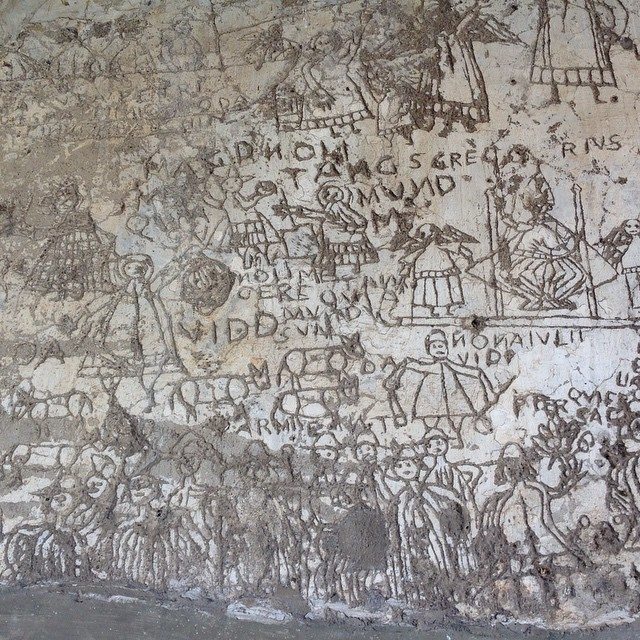 Viterbo’s  Museo Civico  graffiti are particularly interesting for the astronomical scenes depicting the  planets:  the moon is in the center and  Mars, Mercury and Saturn in outer circles. There are  Biblical scenes of  David with  his sling,  sheep and holding Goliath’s head in a bag. There are other probable  religious scenes  too:  an Annunciation with  a bird (Holy Spirit)  hovering over the  Madonna.

While awaiting further research on the graffiti, we can only wonder what crime the  young  Nicolo committed to  be imprisoned in Viterbo and why he created this fanciful  world  full of strange characters  such as the  enthroned  figure in baggy bloomers  (King/Pope?) flanked by angels.

Your clues, transcriptions and suggestions are welcome. Please share with friends who  work in this sector.