A quick visit to Bologna, even on  a rainy weekday, is a chance to enjoy this  compact university city with its  miles of covered sidewalk porticoes  that give shelter from stormy weather.

An umbrella is needed only when crossing intersections and the wide expanse of Piazza Maggiore where  San Petronio Basilica  and Sala Borsa act as  bookends. 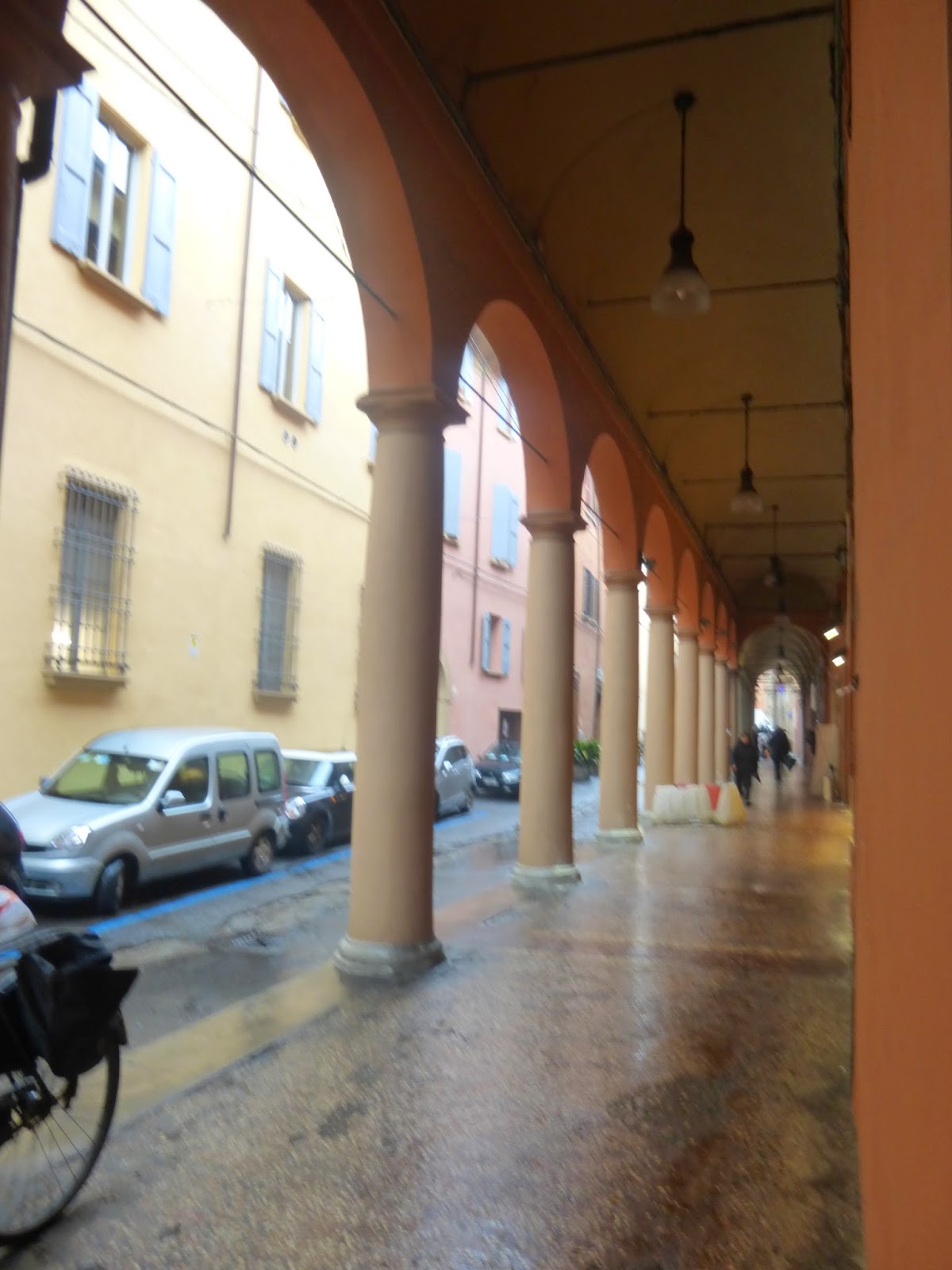 For the past  10 months many central streets have been blocked to traffic for a major  renovation paid for by  European Union money.

The taxi drivers and  shop owners  are furious and tourism in general is  suffering yet a plethora of  tours and cooking classes are offered at the Tourism Office which is making the most of the Expo 2015’s  dedication to Italian food.

There are plenty of areas of the city that are not touched by the renovations but do  keep this  in mind before booking a hotel  in the affected areas. We chose  the Porta San Mamolo hotel in a quiet cul de sac and enjoyed  the silence  and restaurants of  this non-touristy  area  a short walk from  Piazza Maggiore. 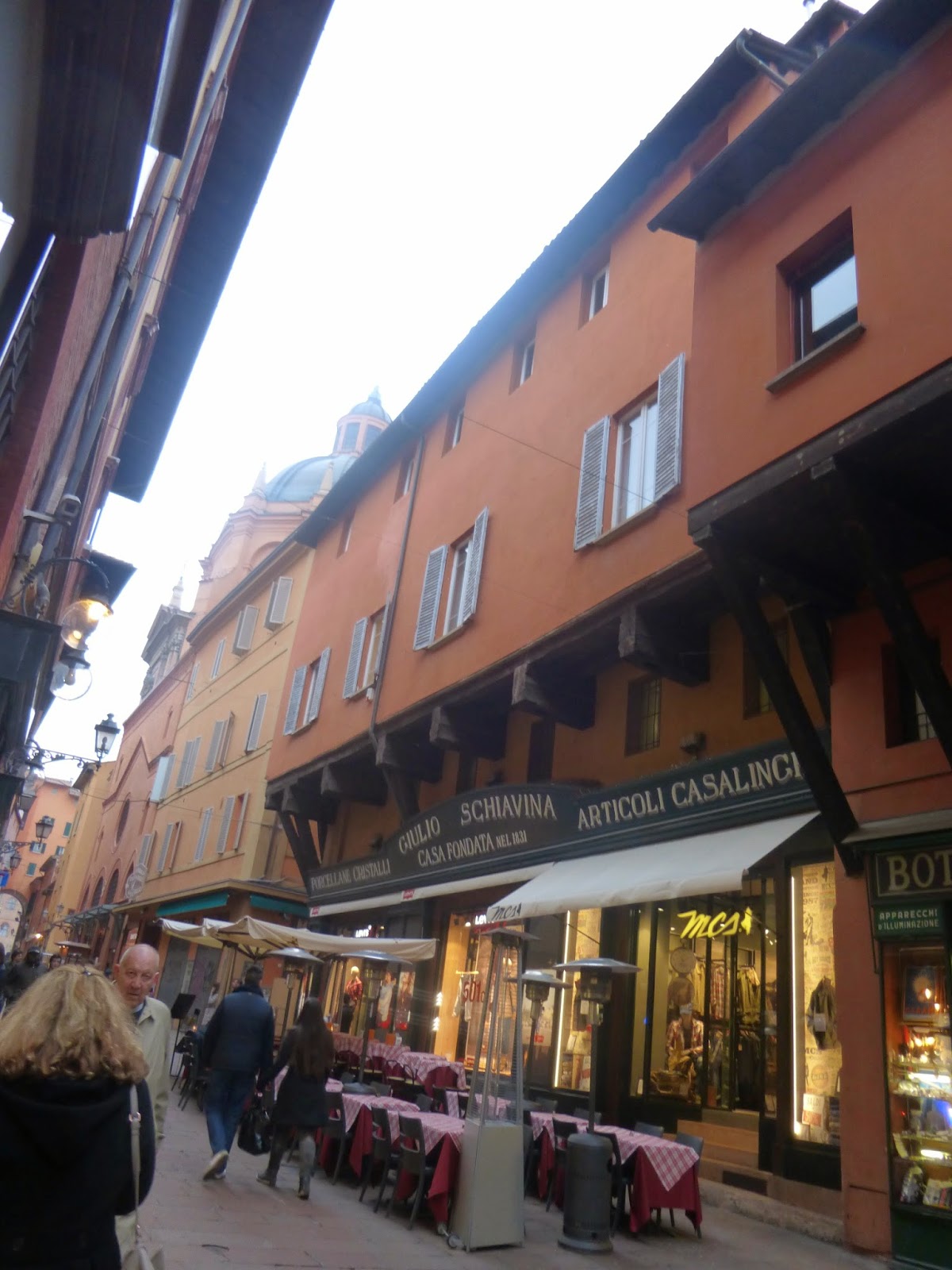 Window shopping  and wandering are a joy in Bologna. The window displays  of luxury boutiques  compete with those of the food shops and market stalls. This people-friendly town has  welcoming  public spaces such as Sala Borsa, for wi-fi and a drink as well as cozy bars and  restaurants for a meal or an  aperitivo.

Bologna “la Grassa” is rightly known for its high quality food shops bursting  with  excellent produce. A walk through one of the central markets or  one of the norcinerie  is a sensorial delight for whiffs of cured meats, cheeses and tartufo fill the air. 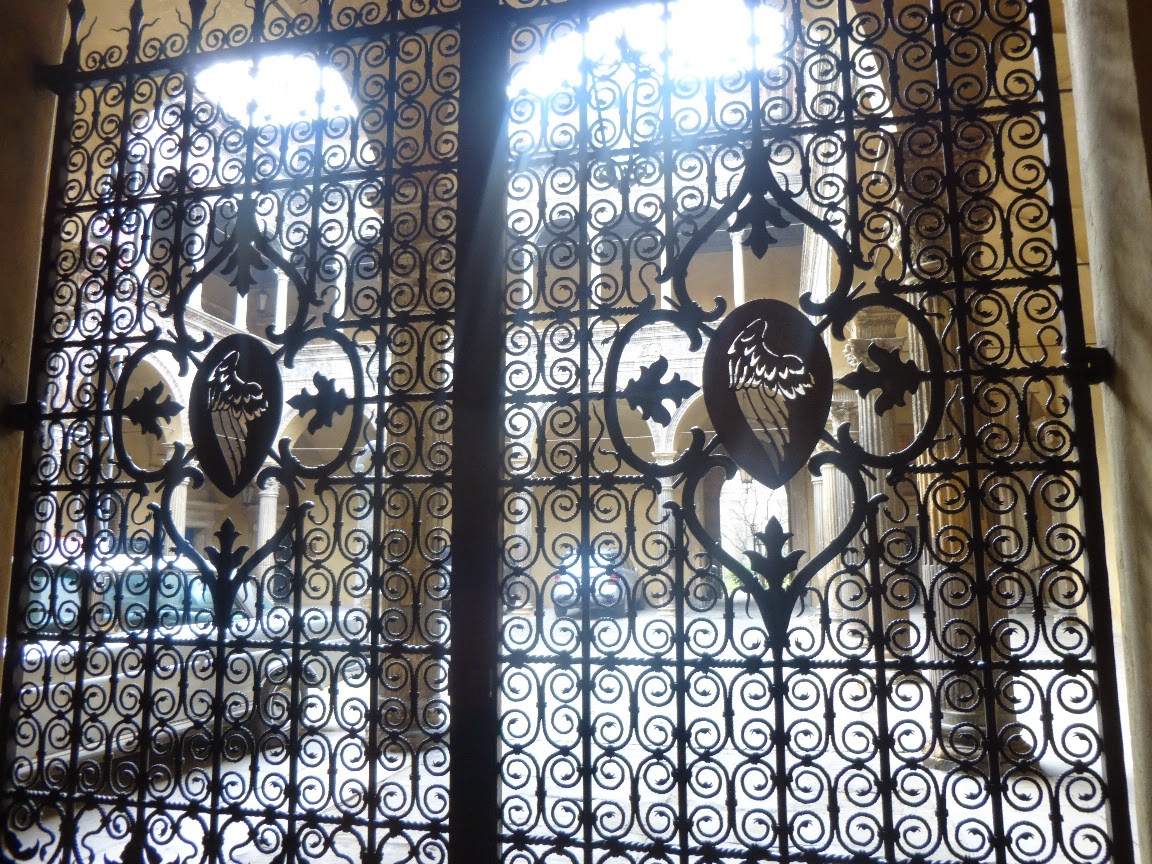 Other sensorial delights for the eyes are the courtyards and colors of  Bologna’s palazzi  in the core of the old city.
Wrought iron gates, marble columns, fountains  and  palatial courtyards exist next to  quirky  statues and  graffiti.

If  the wind and rain become  too strong, make  a beeline for the stately rooms  of the Civic Museum on the upper floors of  Palazzo Accorsio-Bologna’s City Hall- for another sensorial experience and refuge from the weather.

With  21 rooms full of art works, antique furniture,  a newly restored  heraldic hall  and kind volunteer guides, Palazzo Accorsio is only one of the city’s many excellent museums and exhibition spaces.

"Travels to Tuscany and Northern Lazio" only  30 copies remain of this book published in 2004 .
Click  on the link to my website and read reviews.
You can  order one of the few remaining copies directly from the author.

If you enjoyed this article, share with your friends, especially students thinking of studying in Bologna.

Your comments,feedback and questions are welcome.
Just fill in the space at the end of the page.