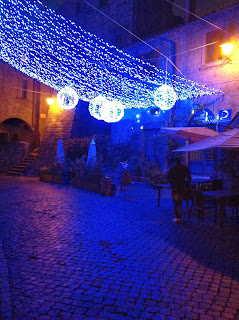 This weekend  I attended an evening  with the promoters of the  UNESCO  project  held inside the Museum of  Viterbo's   cathedral or Duomo.
Walking through San Pellegrino quarter  I noticed the Christmas lights were already  ablaze, adding a lovely blue hue to the  ancient peperino  stone walls and buildings.

Roman candles lit the entrance of the Museum of the Duomo creating a  romantic aura. As I walked to the conference room  my iPad camera caught a few special objects along the way.


Poems were read, the Bishop spoke and those present  wished the committee safe travels to Baku in Azherbijan where, on December  5th , the decision of the commission will be made  during the UNESCO  sites  annual meeting.
In the past 5 years  Italian nominees  accepted  include  lute making in Cremona, Sardinian pastoral songs and the  Mediterranean diet.
Few outside of Viterbo  know that back in  2010 the city  joined  forces with the towns of Nola, Sassari and Palmi  (Gubbio declined, wanting to do it on their own ) to enter the competition hoping  to  have their  shoulder borne processional structures declared  as objects of intangible heritage by  UNESCO.

Partnering with Viterbo’s Macchina di Santa Rosa in the competition are:
-The "Gigli di Nola"  a  procession of eight obelisks made of wood and papier mâché  in honor of Sant Paolino, representing  the boat which brought the Saint to land.
-The "Varia di Palmi", a complex processional structure carried in honor of Our Lady of the Holy Letter.
-The "Candelieri" in Sassari, Sardinia, wooden obelisks which make a  choreographic performance dedicated to the Virgin.

Each celebration  promotes  intense cultural activity that allows citizens to get in touch with all the nuances of the intangible heritage.  Children also are involved in the transmission activities and  in the case of Viterbo’s mini macchine,  carry  smaller processional structures on their shoulders.

On the contrary, the well known Venice Carnival and Palio di Siena both  failed to meet the  UNESCO’s strict  guidelines.
Stay tuned for the verdict  to be given on December  5th.
A positive  verdict  will give lustre to the  centuries-old  festival and hopefully  increase tourism in this ancient, medieval city.
See  also   this post to learn more about the festival.
See how to become a porter of Santa Rosa   here:  interview with the  President  Massimo Mecarini.