The towns and villages in the Tuscia Viterbese just north of Rome are   perfect  for  laid back  vacations since  the area abounds with  luxuriant hills and forests and  there are cool  volcanic lakes and sandy  beaches close at hand.

No matter where you are vacationing  in the Viterbo province a  plethora of festivals featuring artisans, free concerts,  food based  sagras and festivals with  music and dancing can be found within  the radius of  15-20 kilometres .

It is impossible to mention all of them  so here are a few of my personal favorites discovered  over the  past  20 years. Please let us know which is  your  favorite  festival  by leaving  a comment below.

A complete list  can be found on the  Province’s website  while  indepth historical and travel articles in English can be found on my website (updated weekly) and in  our  books  which can be purchased directly or at  local bookshops.

The long awaited   publication about the area in Italian  will be published  in November… per I miei lettori italiani,  a novembre  sarà  pubblicato  il mio libro  in italiano sulla zona .

Bolsena played host to an artisans and books fair  a few weeks ago where  a wide range of   local products were exhibited and sold including  pottery, olive oil,  terracotta floor tiles  and even ostrich eggs . 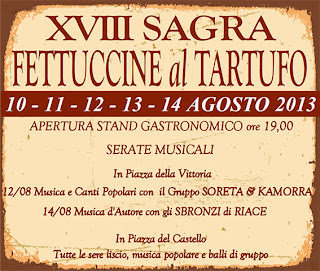 Last weekend the tiny hamlet of  Civitella Cesi hosted  thousands of  diners who were served  fettuccini and other dishes flavored with truffles.

Next Saturday (August 24)   the  town of  Vallerano  will be brightened for La Notte delleCandele   when  50,000 candles will glow and music and shows  will be performed  in  15 different piazzas around town.

Fireworks  expert Emidio told us that the  best (and most expensive) fireworks display  is that held in Vallerano  for the  festival of  San Vittore,   but those  put on by many of the  other towns in the province are also  pretty spectacular.

Another special festival has been brought to my attention by a reader in Orte: its  a good one, not to be missed...

Feel  like just  relaxing?  Don't miss out  on  local band concerts which are held in most towns as part of the Ferragosto festivities.

Vetralla's excellent band, founded over 100 years ago,  will be performing again  in Montefiascone  on  Tuesday, August 20th.

When  its  very hot and humid, do as the local families do and take an evening stroll (passeggiata)  in the town park.

Here in Vetralla it’s the Villa Comunale where people of all ages  come to stroll and enjoy  the cool evening breezes .   What is your favorite  public park?