Rome  is the Eternal City where the years and centuries pass, there are changes and transformations, but nothing ever truly disappears.

I experienced  one such transformation  this week thanks to Fulvio’s book “Olio e Ricordi in Cucina”, for we were  invited  to take part in a TV show celebrating extra virgin olive oil.
The morning program “Nei Cuore dei Giorni” is an hour and a half long  and we were asked to  talk about  recipes,  life in the old days,  grandmother’s recipes such as  little known “ marmellata  d’olive”.


For me it was a return to the past since the TV studios  are located at Via Aurelia 796  in the same buildings that were once  Notre Dame International School…where I taught  in the 60s and 70s.

Wanting to avoid driving the 70 kms to Rome in the dark, early morning hours, we spent the night in Rome.
Our B&B looked nice on the web but it turned out to be an  unhappy choice for  the location on Via Boccea meant  traffic noise throughout the night.

We did enjoy  a lovely meal at a nearby trattoria Antica Torre, a period building surrounded by modern apartment blocks. The owner had restored it keeping  its  ancient flavor and adding  architectural details reminiscent of  medieval buildings.

The  appointment at the TV studio was for  8:15 but  not knowing  the traffic situation we started out early, and  arrived  before  8 a.m. passing the Esso station and turning in at Via dei Faggella.

The entrance  to 796 has changed considerably: there is a rotary, olive trees and where once there were playing fields there are new buildings with offices of  the Bishops,a congress center,   Caritas  and even a nursery school. 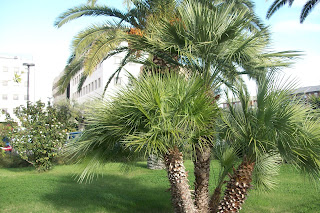 Our contact, one  of the writers for the show Stefano Coltellacci ,  met us at the entrance, where we were  signed in, leaving a document with the portiere,  formerly the  headmaster’s office. 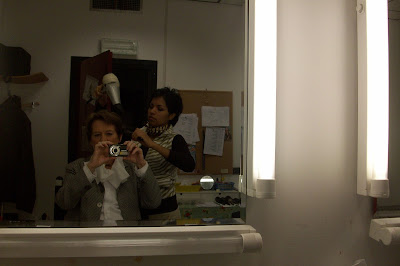 Stefano  brought us downstairs to  make up which was skillfully applied by  Rachel from Costa Rica  who had been hard at work since  6 a.m.

As we waited for  the other guests to arrive, I peeked out the windows and noted full grown trees and lawns where  the school buses used to line up. 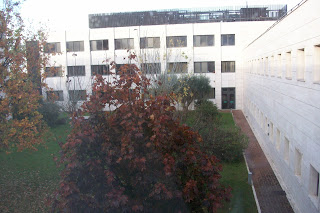 By 9 a.m. we were all inside the studio, the former  gym.

While the art director  and his crew set up the tables and arranged  the props, we met the program’s  lively conductor
Lucia Ascione and learned our cues from the staff. 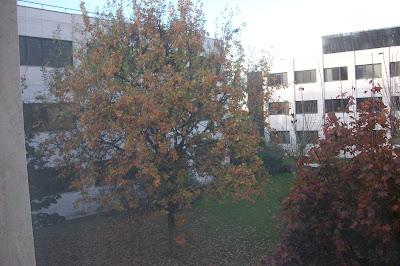 The gym’s structure was still there, hidden under  the stage  props, cameras and lights.

The last segment of the program with Silvio Vitelli was  dedicated  to past years. Here is a clip from that segment where I show off   the 1976 NDI  Yearbook.
A true return to the past.  Your comments are welcome. 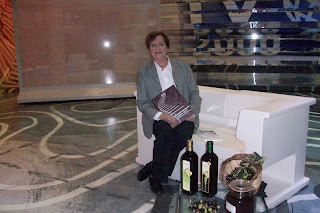