Sphinxes and Pyramids...of the Etruscans

History  tells us how the Etruscan  civilization  was  overcome by the Romans   as they expanded  north   from the  banks of the Tiber.  Here in Etruria or Tuscia,  80 kilometres north of Rome, we can draw  lines on the map connecting the towns of  Vetralla, Tarquinia and Tuscania  to make an “ Etruscan Triangle”.

Here  vestiges of the Etruscan civilization abound  and  new finds are coming to light as I write on this very  first day of the New Year, 2012.

Many of these new-found sites  are described in a small, compact guidebook “Monumenti Rupestri Etrusco-Romani tra I Monti Cimini e la Valle del Tevere“  by Stephan Steingraber (my neighbor here in Vetralla) and   Friedhelm Prayon.
The 45  monuments have a wide variety of forms - but all of them  are excavated or sculpted, rather than  built.

Often it is difficult to distinguish what is made by humans and what has been shaped by  nature and  the passing of time.
There are platforms with and without steps,  steps  without platforms,  cubes , tubs, facades, niches, tombs and others  inscribed  with Etruscan lettering.

The most impressive of these stone carved monuments uncovered  by researchers  near  Soriano, Bomarzo, Canepina and  Vitorchiano are the altars and pyramids.

The pyramid near Bomarzo has sparked many discussions, some say it resembles closely the Aztec   pyramid structures with its 22 steps leading  up to a platform.


In Vulci  the  newest  find –just this week-is a one metre tall sphinx  that proves  the Etruscans of central Italy had much in common with  their  Egyptian neighbors.

Similar  sphinxes  have been discovered further north, in Cortona and Chiusi.

The  sphinx never really faded from local artistic  memory and   during the Middle Ages this lovely one was sculpted as  a tomb decoration for  a member of the noble  DiVico family of Viterbo.

Visitors  to Viterbo’s Civic Museum,   can admire it  as well as another  monument  which  harks   back to  an invented/imagined  Egyptian origin of the city of Viterbo. 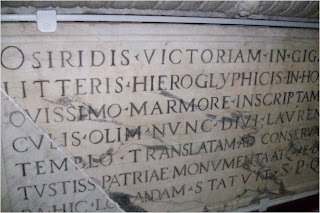 This  Renaissance  sculpture has  profiles of Egyptian gods  Isis and Osiris and an inscription mentioned in diaries of  early visitors to the city, including  Cardinal Henry Stuart, last of the royal Stuart  Kings of England.

Local writer Linda Lappin has incorporated  some of the Etruscan lore and mystery  into her Gothic novel  “The Etruscan”.

Winter  is the best time to explore  Etruscan sites  in central Italy for there are no problems with snakes and high grass.

With  this little volume by Etruscologists Steingraber and Preyon as a companion to my latest book about the area  in your backpack,  you will be able to follow in the footsteps of George Dennis and other early explorers  of Etruria.
Your ideas and questions are welcome. Please share with friends .

For  getting around to visit the Etruscan sites, rent a car and receive 5% discount.