Music, Nature, History and Food ….a typical weekend in Etruria

When city-bound  friends  ask  about  the  life style  here in the province of Viterbo, one hour north of Rome,  I find it  difficult to give a clear answer, for  everything  depends on the   cycle of  the seasons .

Now that it is November   the major  preoccupation is  how  the grape harvest  went and  the  imminent    olive  harvest. Most  events  are  connected  to  agriculture (see  the post on  the Chestnut Festival in  San Martino ) but  often –  thanks  to the many resident  professionals  in diverse fields of culture- there are   happenings which enrich the usually  quiet life of the  Italian province.

In the last  weeks of October   two talented  resident artists  opened their  personal  shows  in prestigious  Roman galleries.    The   works of  Justin Bradshaw  and Patricia Glee Smith l are particularly  appreciated  since they have  both  graced covers  of  my recent publications. 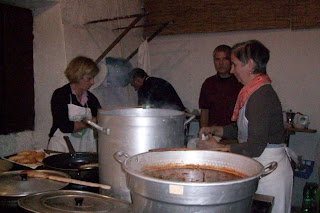 At   the end of  October  two   benefit dinners in   cantinas (COOP and Pro-Loco) took place here in Vetralla with  excellent food prepared  by  local cooks.

Friday, November  4    Archeotuscia    invited  me to speak at the  Prefecture of Viterbo  as part of  the celebration of the association’s  anniversary.
Following  a suspense-full  half hour when it was unsure  whether  the  projector   would work or not,   the  conference hall was full  to bursting and the audience  broke out in spontaneous applause when seeing the connections between  Viterbo/Etruria/Tuscia  and such far away places  as Egypt, Rhodes, Turkey, Malta, Greece  and ports of the Black Sea. 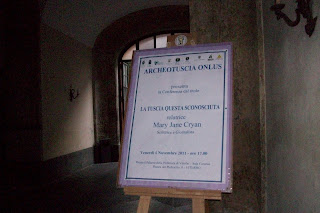 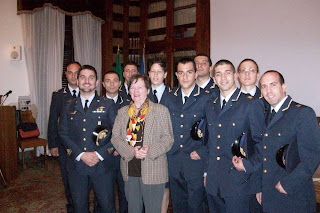 The subject - the mysteries of  Etruria/Tuscia-drew  a wide range of people thus  making  it a difficult audience. The  elderly local poets  were balanced  by   foreign residents (prize-winning author Simon Mawer and his wife Connie of Anguillara) and  student officers of the local air force academy.
Thanks  to photographers F. Pignatale   and L. Ricci  for participating and to Francesca Ceci  of Rome's  Capitoline Museum  for  her kind introduction.

The  long  autumn weekend  was the   impetus  for  a visit from the IAS   international  archaeology  club  of Naples – the third time the  group  has  visited  the area.
President Leslie Xavier and  her  group enjoyed  visits to UNESCO sites  of Tarquinia and Cerveteri  followed by  lunch at  Arcadia  restaurant  in Tarquinia  where we met  for dessert and  book signing.

Later  the  same evening  a different, large group  viewed the  magnificent  wildlife  images  of  Silvio Tavolaro   at   Libri di Natura   Roberto  Gildi’s  specialized  bookshop  in  Vetralla’s  historic center.
The  shop was crowded  with nature lovers and bibliophiles  including   the president of  LIPU   Fulvio Mamone Capria  and  many  weekenders from Rome. 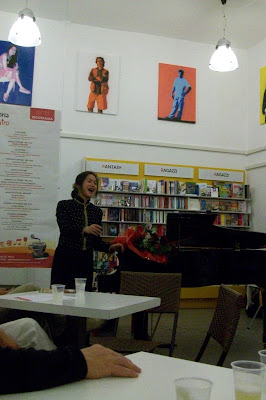 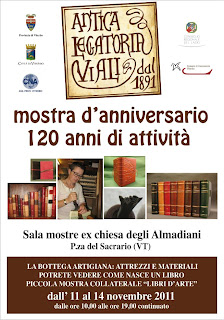