When  you have lived in Italy as long as I have there comes a time when you want to travel further afield, and   what better   "getaway"  than the magical city of Istanbul.


This ancient and modern city  on two continents  never fails to inspire awe, especially  when sailing  in  along  the Bosphorous  aboard  a luxurious  cruise ship.   Here  are  some of the   numerous historical connections  between Istanbul and Rome that make me feel at home there:


The people  are friendly, the public transport is easily mastered and the unmistakeable  skyline  full of mosques and minarets  gives an exotic touch.

Each time I arrive in Istanbul there is a new neighborhood to be explored  by walking  and using  the inexpensive  modern  funicular and metro systems.

This  spring  my  lectures on board cruise ships   Mariner  of the Seas  and  Azamara  Journey   brought  me  several times  to Istanbul where  I  was surprised  to find  further   connections  - this time  with   my  town of Vetralla  in central Italy.

Two monuments   commemorating   Ataturk,  the father of modern Turkey,  turned  out  to be works  of  sculptor Pietro Canonica,  who lived in Vetralla   where  his   villa and  workshop are located. 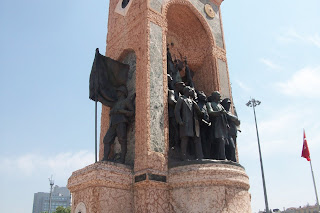 Here is the huge monument  set in  busy  Taksim  Square.  The  flag bearing  figure   is  identical to  the Bersaglieri  monument  in Vetralla.

Another monument,  commemorating  Ataturk's  modernization of the Turkish language, can be found in the Asian suburb of  Karakoy.  Both  are works  of  Pietro Canonica, the genial globe-trotting  sculptor  and  musician   who was popular  with  foreign governments and royal families  in the  1920s-40's.

Check  out   the  house museum and gallery dedicated  to him  next  time you are in Rome's Villa Borghese.  www.museocanonica.it
Posted by mary jane cryan at Thursday, July 14, 2011