A Whirlwind Tour of the Maremma Tuscany

So much has been written about the beauty of Tuscany that it’s easy to fall into cliché when you describe the rolling hills and sunflower dappled fields. Luckily, the Maremma is nothing like the rest of the region. 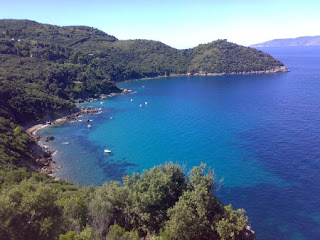 On the border of Southern Tuscany and Lazio, the Maremma was never one for Renaissance art and the courts of kings. Once part of the Etruscan empire, the Maremma has spent the better part of a thousand years as farm lands, and even today the Maremmani remain lovers of the simpler side of life – good food, good wine and good company.
For the modern tourist, the area is a refreshing return to the traditions, character and provincial charm of Italy of old. A visit here is a visit to Tuscany off the beaten tourist track and a glimpse into life in one of the most honest and naturally beautiful corners of the country.
I have lived in the Tuscan Maremma for more than half a decade. While I have only scratched the surface of the area’s incredible beauty, I have been fortunate enough to see some of its most splendid sights. It’s these that I’d like to share with you.

Giglio Island
With summer upon us, there’s no better place to start a whirlwind tour of the Maremma Tuscany than on the Argentario Coast. A short ferry ride from Porto Santo Stefano will take you to Giglio Island, a paradise that blends pristine beaches with beautifully preserved medieval castle towns.
As you return to the Argentario Coast, keep an eye out for the Spanish fortresses that were built in the 16th century when this section of Tuscany was controlled by the Spanish. And because the history buff in me can’t resist, I must mention that the coastline was also ruled by Napoleon Bonaparte for a blink of the eye in the 19th century. Or at least it was long enough for him to gift it to his sister Elisa and to, I imagine, feel a sense of irony when he was later exiled to nearby Elba Island. 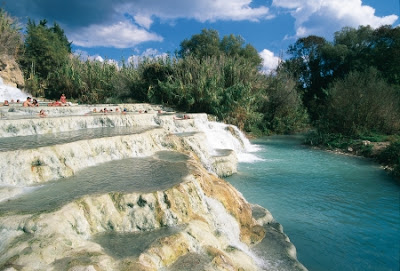 High in the hills of the Fiora Valley, the Roman City of Gold, Aurinia, draws thousands with its hot springs. Today the city is called Saturnia and its hot springs are some of Italy’s most magnificent. At the Cascate del Mulino, 36°C water flows from an underground source into naturally carved travertine pools. A dip in these pools surrounded by the bounty of the Tuscan countryside is absolutely free, but take my advice and visit in the early morning or straight after lunch when the crowds are smaller. 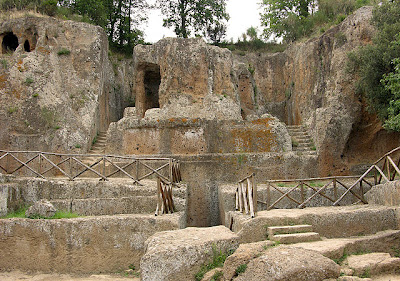 From Saturnia, you can head to the forests between Sorano and Sovana where 3rd and 2nd century B.C Etruscan tombs make up the Parco Archeologico Città del Tufo. Sovana (then called Suana) was one of the artistic and cultural capitals of Etruria and its necropolises are elaborate as they come. Imagine spectacular stone statues of demons and mermaids and a rare Hellenic period temple tomb known as Tomba Ildebranda that still bears patches of vivid yellow and red paint. Remember to wear sturdy shoes when you visit as the necropolis is literally amongst the untamed forests of Tuscany.

Castel del Piano
Dante Alighieri had it in for the Maremma. In the Divine Comedy, he described the area as where " hideous Harpies make their nests". Not exactly a postcard picture, but he’s not entirely wrong. When Dante was alive, the Maremma was a wild place that would have been unseemly and backwards for an educated city dweller like Dante. Despite his scorn, Dante did immortalise much of the Maremma’s mysticism and allure in his prose. One of the most memorable mentions is Castel del Piano, described by Dante as the place where beautiful noblewoman Pia de’Tolomei was brutally murdered by her boorish husband Nello Pannocchieschi. At Castel del Piano, you’ll find the ruins of Pia’s castle as well as some earlier-dated human remains. While you’re in the area, head to Gavorrano to see its fantastic Parco Minerario Naturalistico and Teatro delle Rocce theatre. 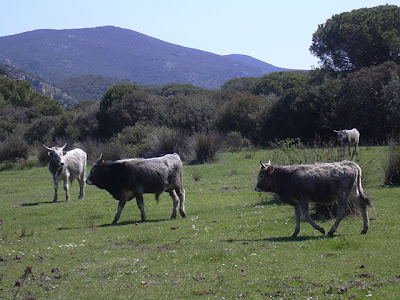 The locals refer to the Tuscan Maremma’s largest nature park as the Parco della Uccellina. It’s one of the few places where you can still see Butteri, the Italian cowboys who work with the Maremma’s very own breed of cow, the Vacca Maremmana. Here the heritage of the Maremma is alive and well, not only in the butteri who continue a centuries’ old tradition, but also in the incredible scenery around you. A series of different walking tracks cross the park. You can explore them on your own or with the free app (available on iTunes). Regardless of where you go though, don’t miss la Spiaggia di Collelungo. On a clear evening, you can see all the way to Elba Island from the shores of this idyllic beach. 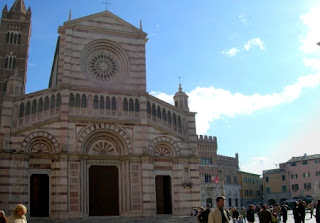 End your whirlwind tour of the Maremma Tuscany in its capital Grosseto. A lot of Maremmani grumble that the capital should be in a bigger and more beautiful city, but I have always been enchanted by Grosseto. It has the grace of an Italian city without the chaos. The main strip is spectacular with its beautifully dressed stores and 13th century terracotta tiled palazzi. In Piazza Dante at the end of the strip, neogothic buildings with tall turrets compete for your attention with the majestic 13th century travertine Duomo. The statue at the centre of the piazza is Leopold II di Lorena, the last Grand Duke of Tuscany. Nicknamed ‘Il Canapone’ for his light hair and beard, Leopold is depicted saving the Maremma’s children from malaria. 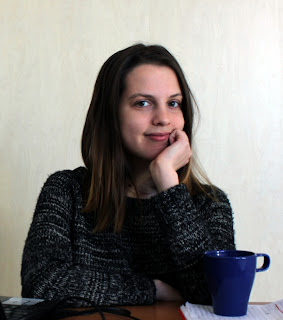 Elisa is an Australian journalist who came to Tuscany for a year, fell in love (how cliché?) and decided to stick around. Not one to keep amazing holiday destinations to herself, she now writes a blog and travel guide about the infinitely beautiful Maremma Tuscany , so that others can get a taste of la dolce vita.