During the more than 35 years that I lived in the city of Rome on a typical spring weekend we would  drive  north along the Via Cassia to visit one of the medieval towns or beaches on the lovely  lakes of  Bracciano, Vico  or Bolsena. I had barely heard of, and never visited,  the tiny volcanic lake  of Martignano, adjacent to Bracciano and  now part of  a protected  Regional  Park that is  13 years old.

Off the radar for contemporary  Romans, Martignano was popular with  ancient Romans such as  Emperor Augustus who had an aqueduct built to carry  water to the inhabitants of Rome's Trastevere quarter, 33 kilomtres away.


Then for centuries the lake was off limits, incorporated into one of those huge estates belonging  to papal nobility such as the Odescalchi who also owned Bassano Romano .


These centuries of seclusion meant that Martignano remained virtually unknown and  unvisited, allowing it to remain in pristine condition and making it today the perfect getaway for nature lovers,  bikers, trekkers and birdwatchers.

During our visit, besides the two park rangers who narrated a bit of the Park’s  history, we also met the  mythical Giorgio
who  ran the canoe and boat concession back in the 80s  when the only living beings around the lake were grazing sheep and cattle and the occasional migrating wildfowl.

Now the area comprised in the Natural Park (and bordering  towns of Anguillara, Bracciano, Trevignano,Cesano and Campagnano) plays host to  numerous  groups of sailing, horsebackriding, biking  and  birdwatching groups.

On the day we visited the lake and the spectacular Potrero Grande  Agriturismo,

we ran into bikers, couples  on horseback and  a group of more than 50 birdwatchers who were walking around the lake, counting, photographing and designing

the bird species they encountered.

At  lunch time we all  convened at Casale di Martignano for a buffet lunch followed  by a seminar  on one of the rare species that inhabits the lake. 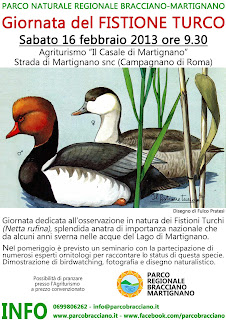 Have you been to Lake Martignano?  Do you know of other  natural areas where one can  practice sports, birdwatching close to Rome ?  Please  leave comments and suggestions of  things to do in this area, so close to Rome, yet  immersed in the beautiful countryside.
Posted by mary jane cryan at Sunday, February 17, 2013