The Guinness of Bonfires

Il Focarone of Bagnaia is the biggest of the hundreds of  bonfires   that are lit all over Italy on the night of January  16th-17th in honor of  St. Anthony Abbot, healer and protector of livestock.

For the entire  week preceding  the festival,  groups of young people were hard at work setting up  the  eight-metre tall mass of tree  trunks and other  timber in the middle of the piazza.

The expert  builders must   insure that the bonfire will burn evenly  so it does not collapse on one side. 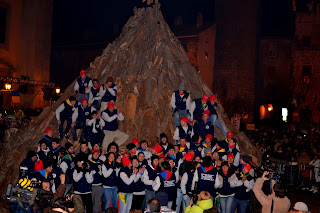 The   mid-winter bonfire  is  a tradition that is  strongly felt  by the Bagnaioli, as the townspeople are called. 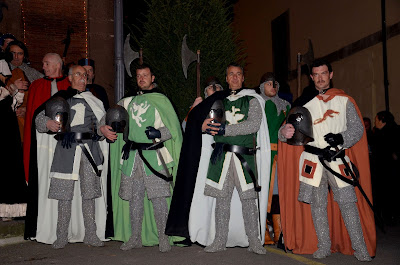 The  festivities begin  at 5 p.m.  with a  procession of costumed dignitaries representing important characters in the town’s long and sometimes tragic history.

These include  La Pucciarella, a young girl who defended Bagnaia when the  Lanzichenecchi lay siege to the town in 1527.

The flag throwers are followed by the igniting of the bonfire at 6:30 p.m.
The flames leap higher than the village rooftops heating up  the piazza and the crowds who come from Viterbo and other  nearby  towns.
Bagnaia is mostly known for its magnificent Renaissance  Villa Lante gardens, which are a perfect retreat in sultry summer weather,  so it is a surprise to discover this tradition offering respite from winter's cold.
Posted by mary jane cryan at Sunday, January 13, 2013