The square  bell tower guarding the entrance to the medieval hamlet of Bassano in Teverina  holds a secret.
Its stout 17th century walls hide another, medieval tower  invisible to the outside world.


This   tower within a tower is   unique, definitely   material for  the Guinness book of records.
How did it happen? It seems that the original tower  was enclosed by the "modern"  one when  the town's defenses  were  updated in the  1700s.
It was easier to enclose the existing one than to destroy it then rebuild.

During the weekend of July  28-29 the annual festivities in the town of Bassano in Teverina will include  guided visits of the double  bell tower, now restored and fitted out  with a lift, allowing visitors to admire the decorations on the medieval tower as they ascend to the top.

The hamlet suffered from bombing during the last world war  and over several decades restoration has taken place to transform the castle ruins  into an apartment building housing about 30 families.

In the  18th century large palazzi were built in the newer part of the town and today they contain holiday apartments, a restaurant and even a swimming pool hidden behind high walls.

Not too far away, along the Orte-Viterbo superstrada, another  tower can be seen rising above the Mediterranean brush  near the tiny village of  Chia.


This is  Pasolini's  tower , once the hideaway of  famed Italian  poet and film director, Pier Paolo Pasolini.
Years ago, when the construction of the  modern complex  was still under way, the builders  let me look around. The modern living quarters built  beneath the tower resembled a ranch house and contained five ensuite bedrooms  for  guests.

The complex is private property and officially not visitable, but it seems that a cultural association is planning a Literary Park in the area along the banks of the stream once used as a film set by  Pasolino. 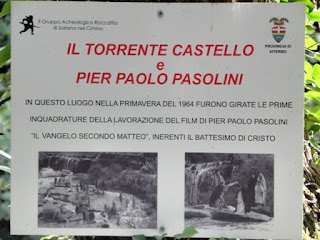 There is such a wealth of interesting sites and possibilities for tourism in the area of Tuscia/Etruria yet many remain  forgotten  and abandoned.