Olive Marmelade,Medlars and Discoveries in the Duomo


We  were not able  to celebrate Thanksgiving with a traditional turkey dinner  for local butchers  make the  birds available only after  December  8th, the feast of the  Immaculate Conception.  Nevertheless several interesting things  happened in this last week of November .

Conference  at the Prefecture of Viterbo  with archeologist Francesca Ceci

Winter  is the best  time to  make outings  to the numerous  Etruscan sites  that surround Vetralla, Viterbo and Blera. For  information and dates for excursions  check the website of Archeotuscia. www.archeotuscia.it

Discoveries   in the Duomo
While  preparing   the new  tourist guide for  the town of Vetralla’s Pro Loco (a volunteer position!) I  came upon  this  terracotta sculpture  which had been hidden under  a side altar  for  at least  a century.
It depicts  a very effiminate  Adeodato, one of the  town’s  early patron saints before St. Ippolito was given this title. The blonde wig, dagger, clothing and sandals shows  he was a Roman martyr. 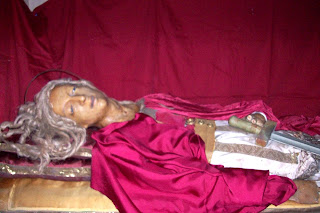 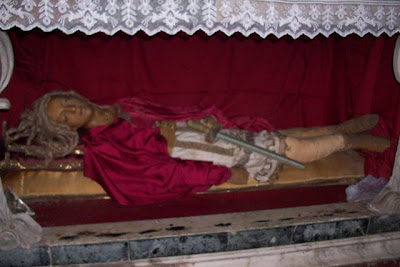 Another special  discovery was this marble  ciborium dating from the Renaissance period.   It needs a good cleaning and the door, which was probably of silver, is missing  but at least  it is still in place.  A precious altar cloth (paliotto) seems  to be missing. 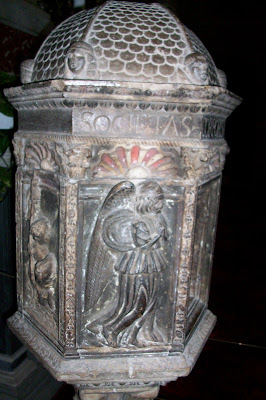 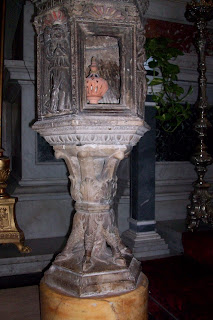 Medlar  (nespolo)  Tree with Ripe Fruit
This single  fruit  tree   set among our   80 olive trees, is a rarity today  but  they were  often depicted in  medieval frescoes and  Renaissance  tapestries.
The fruit  is almost  ripe and they have an ancient,  unusual  taste.

Have any of you ever tasted them? 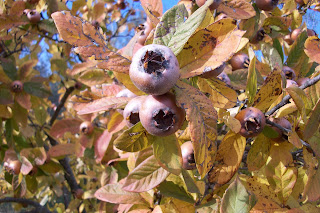 Olive Marmelade –Marmellata d’olive
A few  well laden  olive trees  were spared from the  recent harvest and  this week the big, black fruits were gathered  by hand and  made into  marmellata d’olive.

It is a very  time consuming  task for the  olive pits  must be  removed  one by one- by hand.

Hours of   cooking  and canning follow. The resulting marmelade will be used  in several  traditional Vetralla  meat dishes during the year.


Looking for  the recipe ?  It can be found on  p. 84 (next to the photo of Milena picking olives)  in Fulvio Ferri's recipe book  “Olio e Ricordi in Cucina”  available only   at  the Anglo American bookshop  in Rome,  Libri di Natura in Vetralla or better yet,  directly  from  the author  with an inscription and free postage to Italian addresses.
Visit this page to find out more and make your order  in time for Christmas.   DEc. http://www.elegantetruria.com/fulviorecipes.htm

Where  to find Mary Jane  next week